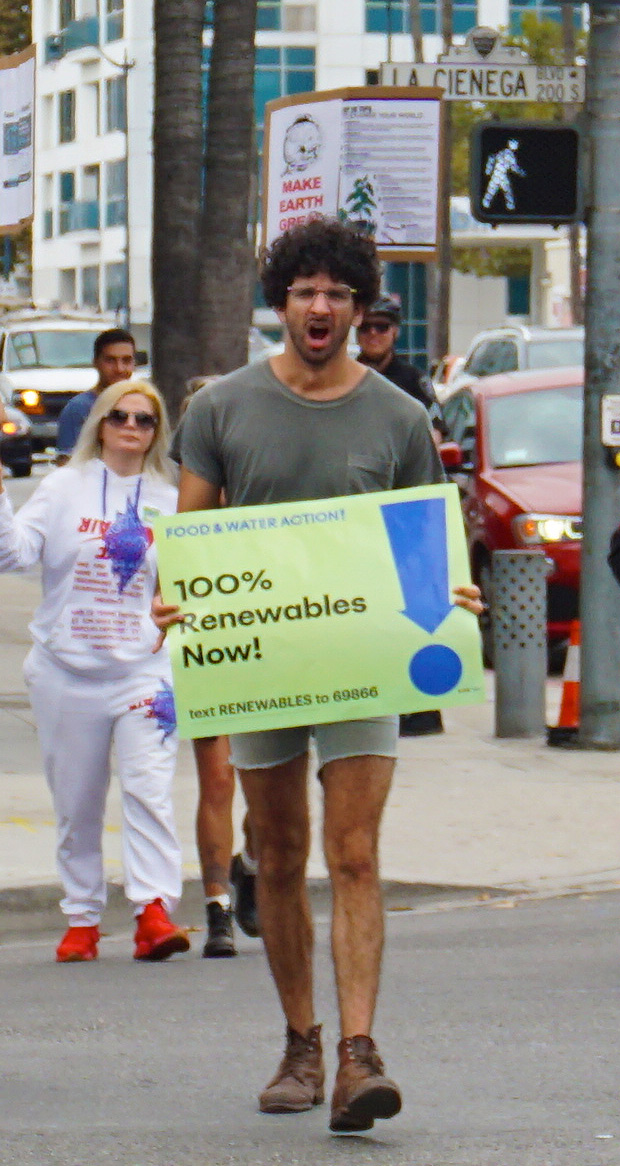 “All things go, All things go...” is a lyric from Sufjan Steven’s song that I heard again recently. Though it’s not in any way related to climate change, animal extinction, or loss of forests, I found these words gave me a strange, heavy emotion about all things, especially feelings about our planet's health. We don’t want all things to go away. Having attended climate change rallies and marches possibly made the lyrics resonate and punch me in the heart a bit.

I've read about climate change in a real-world sense and even cli-fi, climate fiction that presents alternate world scenarios related to climate. Whether it’s learning about the problem or possible solutions to maintaining and building a healthy earth environment, I want to be in the know. And I think attending a protest march can be educational for people who are aware and unaware of environmental issues and concerns of our time. 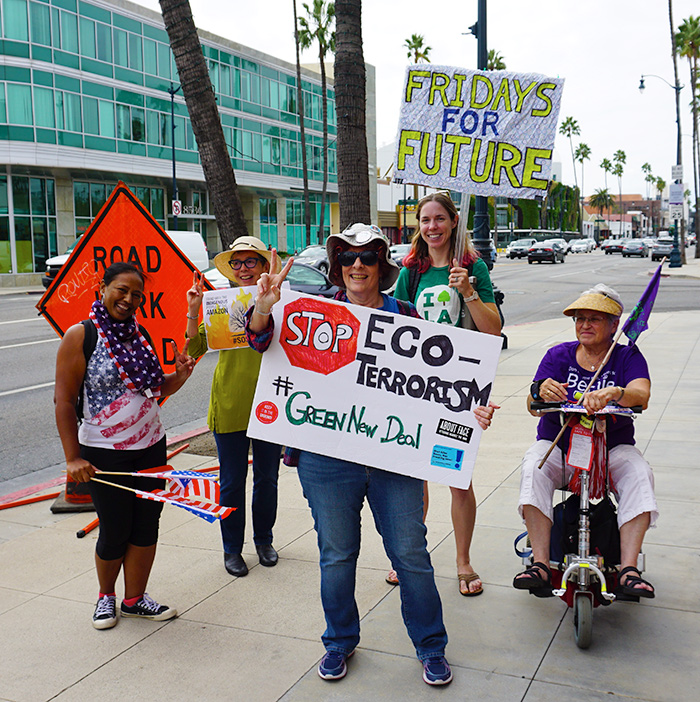 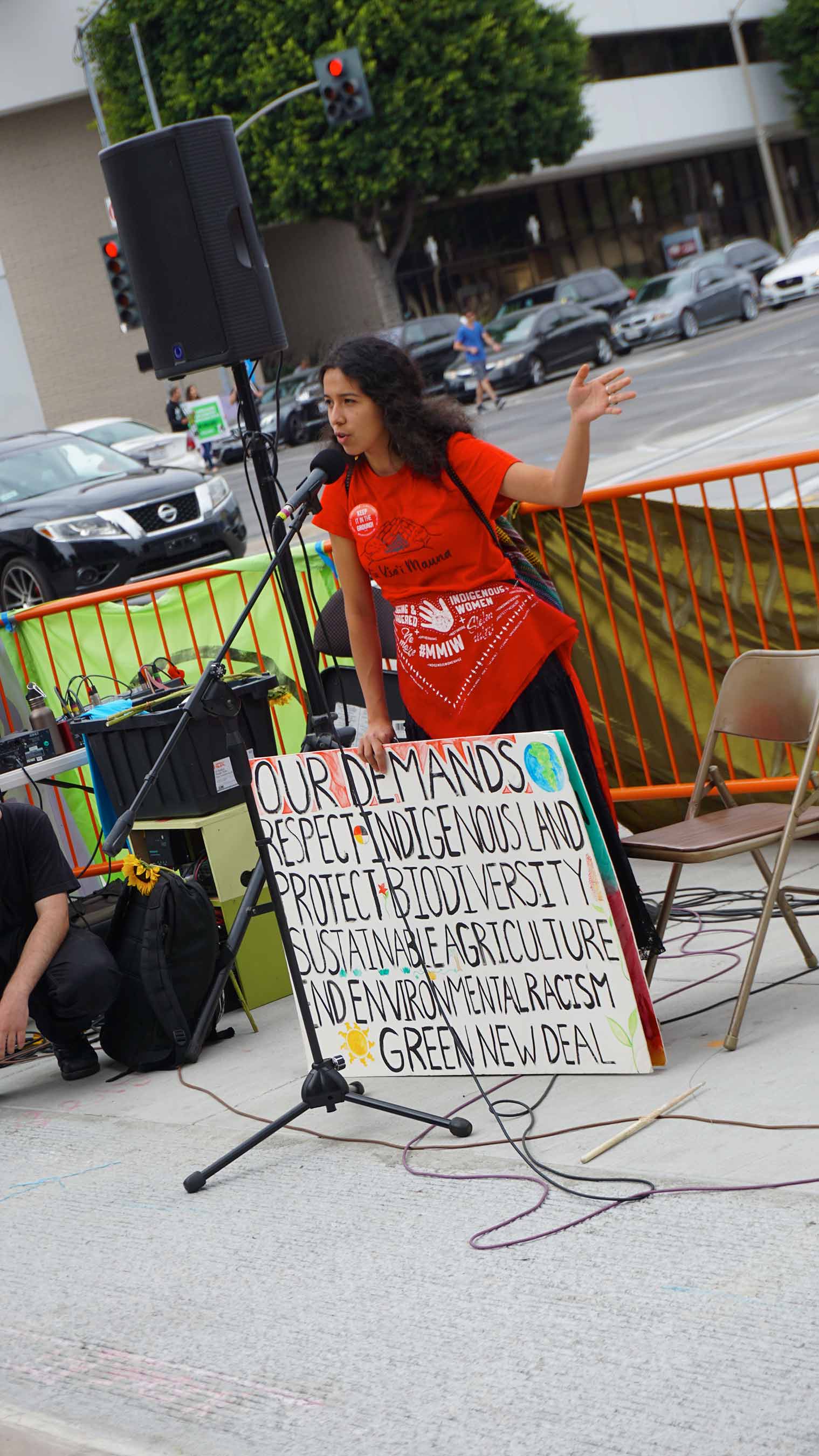 In California, there were a number of gatherings around climate issues in these past weeks. I’ll talk about an event organized in front of the Consulado-Geral do Brazil (Consulate-General of Brazil) in Beverly Hills, California on Friday, September 27, 2019 10:30-2:30PM. This Global Climate Strike event brought people from SoCal 350 climate organization and many others together, drawing attention to the Amazon rainforest burn, global climate policies, indigenous environmental defenders, corporations and government responsibilities and accountability, and other issues.

On this corner of Wilshire and La Cienega Blvd, tables were set up by groups representing Food & Water Action! , Sunrise Movement, Stand Against Neighborhood Drilling (S.T.A.N.D) Los Angeles with a total of seventeen organizations involved in this event. A table covered in multi-colored textile cloth with grapes, bananas, mandarins, chips, brownies, fig bars, and other food also was available to anyone. One of the organizers and main speakers, Lydia Ponce, said she always wants to bring hospitality to an event. Nearby speakers with a microphone stood on a platform talking about particular issues, some related to indigenous people, deforestation, and government policies. Bands, like Year of the Crow, Maya Rose, and other musicians performed. A blue, white, and green flag for veganism flew overhead beside an artist-designed white and black flora themed flag.

Many groups and individuals at the event had signs, banners, and t-shirts displaying the issues that concerned them. Some stood on the roadside, encouraging cars and trucks to support with honks. Others waited on the four street corners of this area with their signs, then used the pedestrian crosswalk as an opportunity for a captive audience as they paraded in front of the waiting vehicles with various climate change messages. Later in the day, a large group gathered to march down the street in front of Chase and Wells Fargo banks, chanting, “No coal, no oil, keep it in the soil” in an effort to discourage fossil fuel investment.

Why people are willing to get out to show support and educate others about these environmental issues is important to think about. We get motivated, when things we love feel threatened. I don’t know exactly why there is this building momentum. Earth Day activities were initiated decades ago, but it feels more urgent. Maybe it's due to awareness of scientific findings or because certain people can bring more attention to these issues. For me, it’s a constant education to be better informed, reading climate change web resources, LA Times newspaper, Confessions of an Economic Hitman book, and watching National Geographic "Activate Global Citizen Movement" series. It has me thinking about human responsibility for what is happening with the environment. Also, there is always the Arizona State University Cli-fi books to stretch that mind with catastrophic environmental scenarios alongside what could be solutions for global climate-related issues.

At this particular Global Climate Strike event in Beverly Hills, there were people of all ages in attendance. I spoke with a few who were traveling across the country from NYC while showing support for the organization Extinction Rebellion. Karen Flaherty, along with her husband and a friend, was on a cross country 10,000-mile journey that was equal parts bring awareness to environmental emergencies and a vacation. She had retired from working for Tiffany’s in NYC and San Fran and was never a big activist in the past, though now feels it's time to be an activist. Since she wasn’t in New York for the UN climate summit, today’s event was important for her to be out wearing her sign and talking about these climate related issues.

At one of the tables, I met USC music student Noa Zimmerman, wearing her “Green New Deal” t-shirt of the youth-led Sunrise Movement. As a member of this national organization she has learned how to mobilize and bring awareness to climate issues. When asked about what influences her activism? She reflected on the 1960s and 70s musicians like Bob Dylan and Joan Baez, who talked about social issues, and Martin Luther King’s efforts at Selma. When asked about climate change issues, she discussed the Green New Deal—which involves lots of transitioning from fossil fuels to clean new energies; climate justice where marginalized people would be paid back for what climate change has cost them; and the importance of electing a candidate concerned about these policies.

Another person who came out to march was local radio host, Tanya Mayahuel Torres. Her show Canto Sin Fronteras program on KPFK 90.7 FM Sundays 6-8pm brings Latin American and world music, along with strong social political themes. She and others came with climate change signs that read, "Save the Amazon" in Spanish and English.

What we do matters

Learning about climate change issues can happen at a rally, march, or even at home while reading an article. I think it helps if people can get out and learn what others are saying on the streets, then go home and read more. What we are doing to our environment matters, not only to humans but to our finned, winged, insect legged, and other living species that share this Earth.