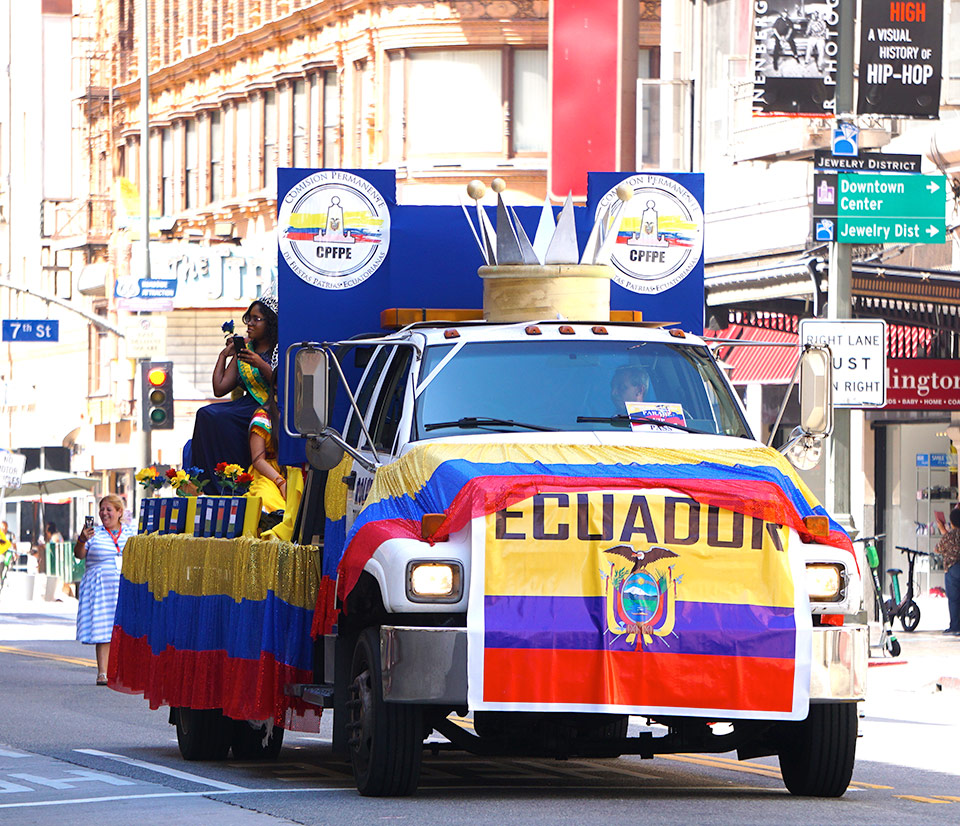 Before I attended the 21st Taste of Ecuador Parade and Food Fest in downtown Los Angeles, I had been reading Kurt Vonnegut’s Galápagos book and watching Anthony Bourdain’s No Reservations trip to Ecuador (Season 6, Episode 6). It wasn’t intentional Ecuadorian research before the event. I often read anthropology and science fiction books for my courses, and can effortlessly spend hours watching food and travel tv. Coincidence, maybe, or the universe prodding me to go the Ecuador parade.

I arrived at the ribbon cutting with queens and important people on Broadway beside the old Rialto Theater (a.k.a. Urban Outfitter store). At that point, still a bit groggy, I wished I had one of the fictional universal translators in Vonnegut’s book. A Gokubi (10 language translator) or the Mandarax (1000 language translator, human disease diagnosis machine, encyclopedia of history, and impressive knowledge of the art of flower arranging) would have been perfect devices for my tired brain that day.

Catching a view of the Galápagos turtle George on a parade float, then walking over to the replica of Quito’s equator monument, I was drawn into Ecuadorian historical territory, via downtown Los Angeles' Broadway street. At first, I didn’t realize what the tortoise represented. It was symbolic of the last Pinta Island tortoise species in the Galápagos that has since become a conservation icon. Lonesome George was 100 years old when he died September 26, 2014 of natural causes. The blue footed boobies beside George are some of the distinctive birds of the Galápagos. It was later while talking with a member of the Rivan family of La Puente, CA that I learned more of the real George’s history and that this was the 2nd time hand-made George had appeared in the parade. Their float was representative of Comite Civico Ecuatoriano Los Angeles, though George had been living in the Rivan family front yard when not making these parade appearances.

The other parade float reflecting Ecuadorian history was the Mitad del Mundo (Middle of the World) park landmark replica. It almost looked like the real stone of the original trapezoidal-shaped monument. In Ecuador, it is a 30 m high stone monument with a brass globe, located very close to the actual equator line. In LA, way north of the equator, on a mobile platform, this vinyl looking stone monument replica is much smaller with a desktop crème colored globe atop, letters representing Norte (North), Sur (South), Easte (East), Oeste (West) on each side, and two queens standing in front of it.

The national colors of Ecuador were everywhere, decorating the clothing, flags, banners, and floats in symbolic yellow, blue, and red colors. These colors have their own history. The blue is symbolic for independence from Spain (May 24, 1822). The yellow refers to the Federation of Greater Columbia, also known as Gran Columbia, which at that time grouped Columbia, Venezuela, Panama, and Ecuador (1819-30). And the red is symbolic of courage.

Some of the 24 Ecuador province flags were also on display on the Comisión Permanente de Fiestas Patrias Ecuatorianas (CPFPE) queen float. After seeing all these flags and names of places in Ecuador, it seemed I really needed to learn more about the four regions: Amazonia, Costa, Insular, and Sierra, and their associated provinces. Although I had my recent virtual trip through the tv shows eating concha ceviche on the coast and visiting the iguana park in Guayaquil, this parade was a real connection to the country. Later, when I made it to the the Ecuadorian Food Fest of the event, I felt I had made the journey to the equator when I ate ceviche from Comite Civico Ecuatoriano Los Angeles's booth that surprisingly had a crown on the table and a queen serving ceviche de camaron. The line for Yayita's was long and I did want their ceviche de concha with the corn nuts and their plantains, but the Quito equator queen (not her real title on sash) was serving ceviche, that seemed pretty special.

The Ecuador Parade on August 4, 2019 included not only Ecuadorians but people from Guatemala, El Salvador, Dominican Republic, and others who walked or rode along this historic Broadway theater district. The parade route passed by a few notable LA landmarks such as the the Grand Central Market, Bradbury Building (Blade Runner/ DC and Marvel Comic fictional headquarters) and finally the Olvera Street Los Angeles Plaza Park with food booths selling Ecuadorian food near the Father Serra statue.