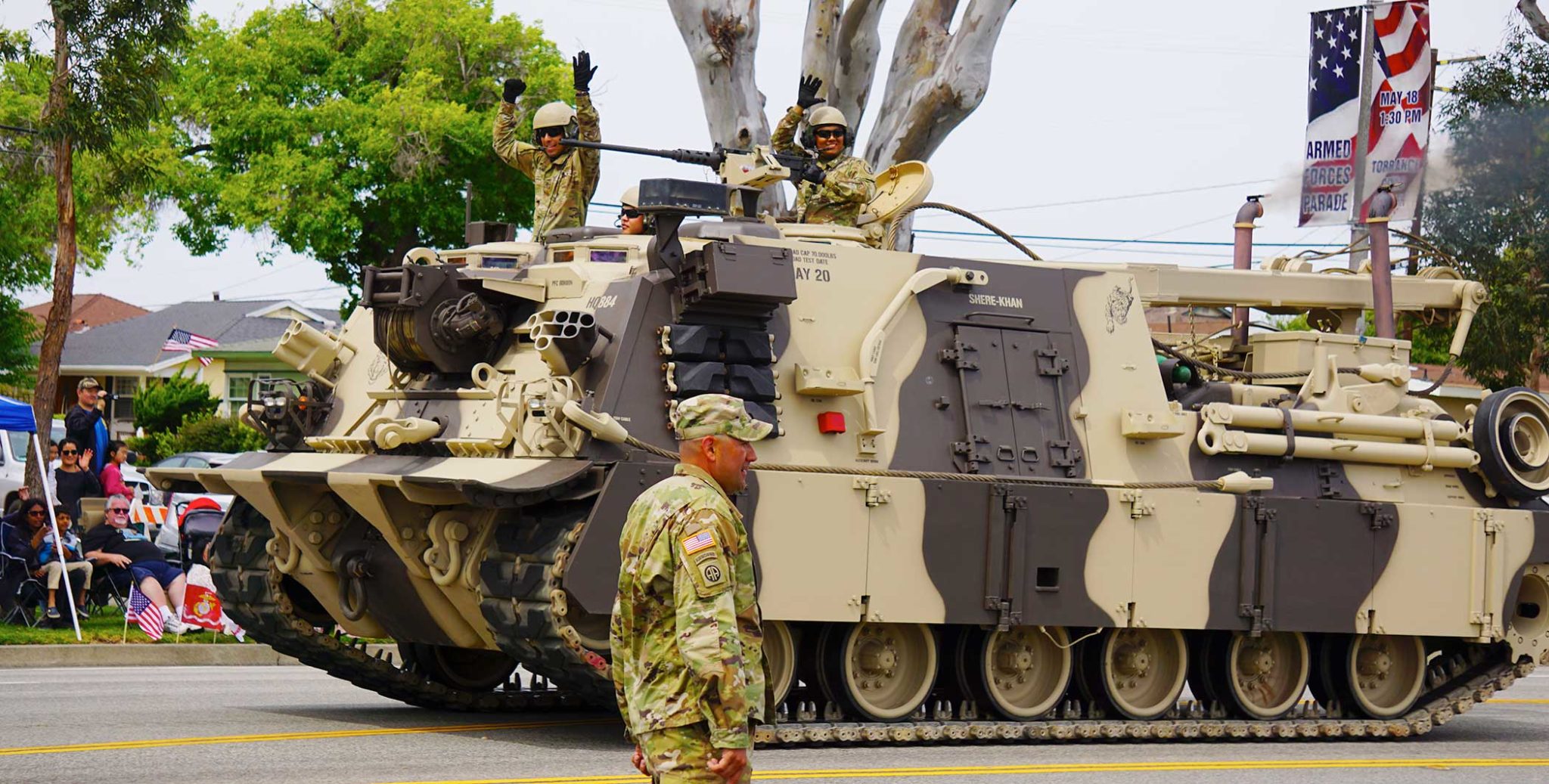 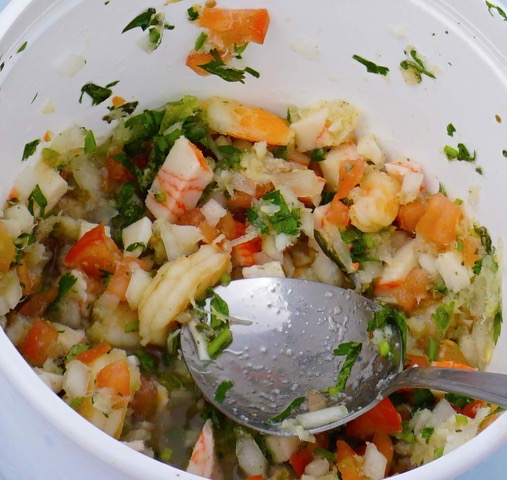 Looking at photos of Armed Forces Day Parade in Torrance, California spun my mind backward like a time travel trip. I was tasting the tangy ceviche on my tongue and feeling the vibration of tanks passing by that day. I mean realistically, it might have been a combination of cayenne lemon kombucha tingling my mouth and a large 18-wheeler moving truck outside the apartment, but I think I prefer the memory.

Now it's around May 16, 2020, and the local Armed Forces Day Parade has been cancelled, so I'm revisiting my parade photos from past years. It's quite an impressive parade with all the U.S. military branches, including Army, Navy, Air Force, Marine Corps, and the Coast Guard represented. A number of other groups participate from the military schools to USO volunteers, Girls Scouts, Go For Broke veterans, high school bands, and so on. All walk or ride the mile route, down a wide tree-lined Torrance Blvd. The parade ends with historical reenactors in uniforms carrying rifles and swords to portray soldiers who fought in past wars on American soil.

The parade is a presentation of national symbols and familiar imagery common to what one sees during the U.S. Fourth of July, Veterans Day, Memorial Day, Presidential Inauguration Day, and homecoming parade events that honor notable figures. It makes me wonder if there might be a Space Force military branch presence in a future parade. I guess that is something to ponder along with what a post-pandemic war parade would like. Maybe in the future, we will have public health-related heroes and essential workers participating in the parade.

Armed Forces Day created August 31, 1949, is described as an “educational program for civilians” where people would learn about the role of the military and honor those who serve or served in the U.S. Armed Forces. It was known as “a day for the military to show ‘state of the art’ equipment to the civilian population they were protecting.” (USO.org)

The first parade in celebration of this day was in Washington, D.C. May 20, 1950, during military appreciation month. Chattanooga, Tennessee is credited with having the longest continuously running parade in its 70th year 2019.(wdef.com / calendar365.com)

The Torrance, California Armed Forces Day parade was started in 1960 by the former Mayor Al Isen. It was celebrating its 60th year in 2019. (dailybreeze.com) If I could time travel back to the parade (spoiler alert)

I've recently read the book Recursion by Blake Crouch, and now I'm imagining how I could go back in my memories and relive the Armed Forces Day Parade moment. I know this is a bizarre way to think about the parade, but why not mix a little science fiction with reality. I don't want to go back and change the memory necessarily, but having access to this book's time travel memory chair would be amazing. No more isolation against the coronavirus COVID-19. Instead, I would be eating ceviche while watching the parade and having an eventual hugging moment with a friend. Oh, the days of human contact and large group gathering, so long ago. Of course, I don't want to bring on another world health problem due to my time travel, as in the book, where people experience FMS health problems, a.k.a. False Memory Syndrome, as a result of all this timeline revising. Also, there is that big problem of someone stealing the time travel memory chair blueprints, leading to world powers with chairs of their own, each vying for different revisionist history timelines. It's total timeline chaos.

But if I could

Time travel back in my universe without any disastrous effects, I would see people setting up tents, blankets, chairs, coolers, grills, and food tables on the greenway and sidewalks along Torrance Blvd. Miniature American flags waving in the air. Lots of red, white, and blue patterned clothing on children, adults, and pets. Free water with affixed labels stating church affiliation. Bags of mini chips and red licorice in boxes under group canopies.

Around 2:00 PM with the parade lineup underway, in my time travel state, I would see a man repeatedly stand up and salute the military vehicles. The whiff of grilled sausages floats in the air. There is a woosh sound of canned sodas opening and mingling with the steady sound of feet marching up the street. Handclaps and woohoos by the crowd overlap with little kid squeals as sailors in white and blue uniforms escort the miniaturized Navy ship. Tanks rumble and vibrate the ground. Intimidating gun-wielding military personnel in camouflage walk along the street. If it were not a parade, I think this part would scare me into thinking I just entered some dystopian wartime scenario. Fortunately, I had not. 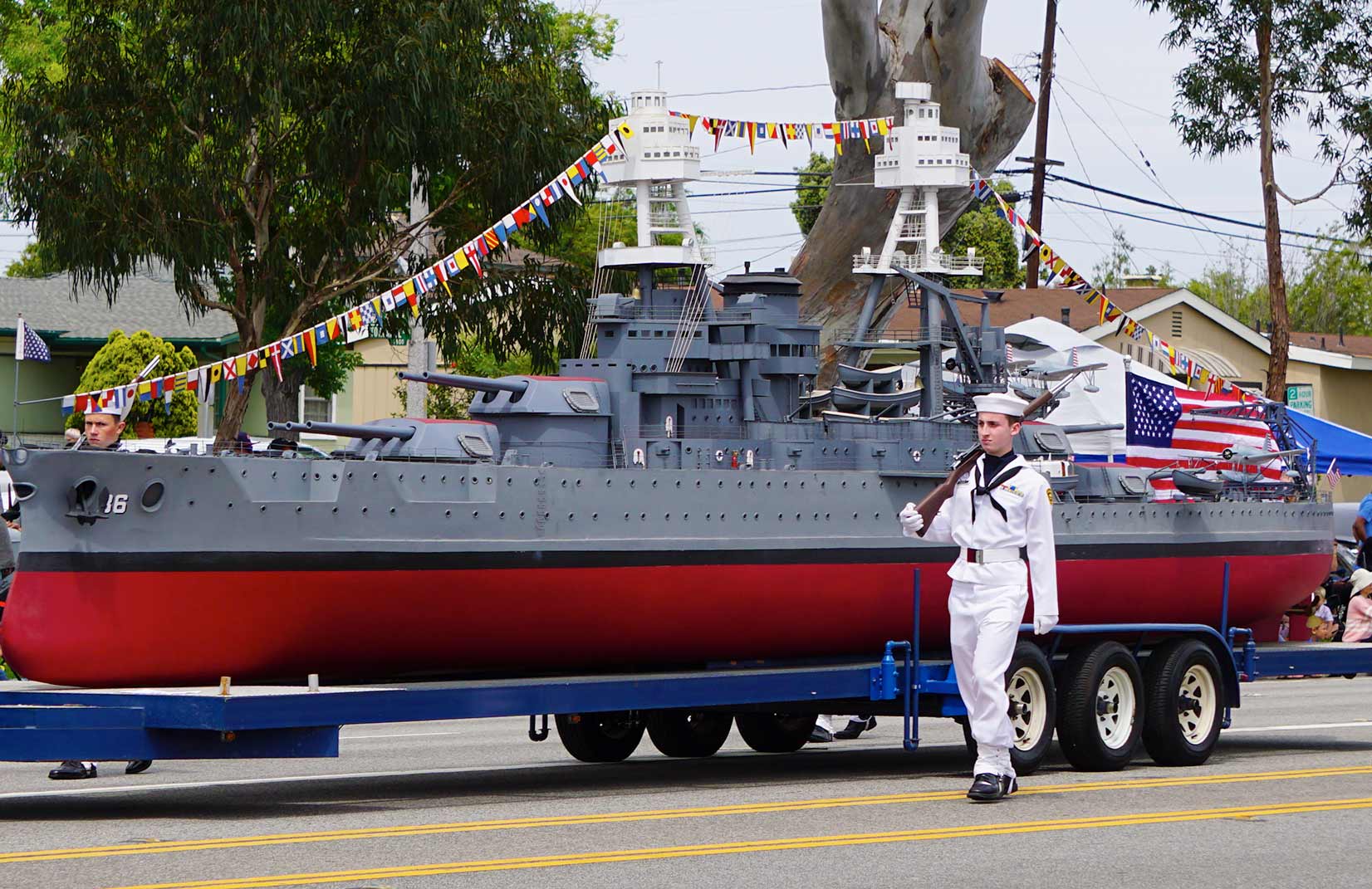 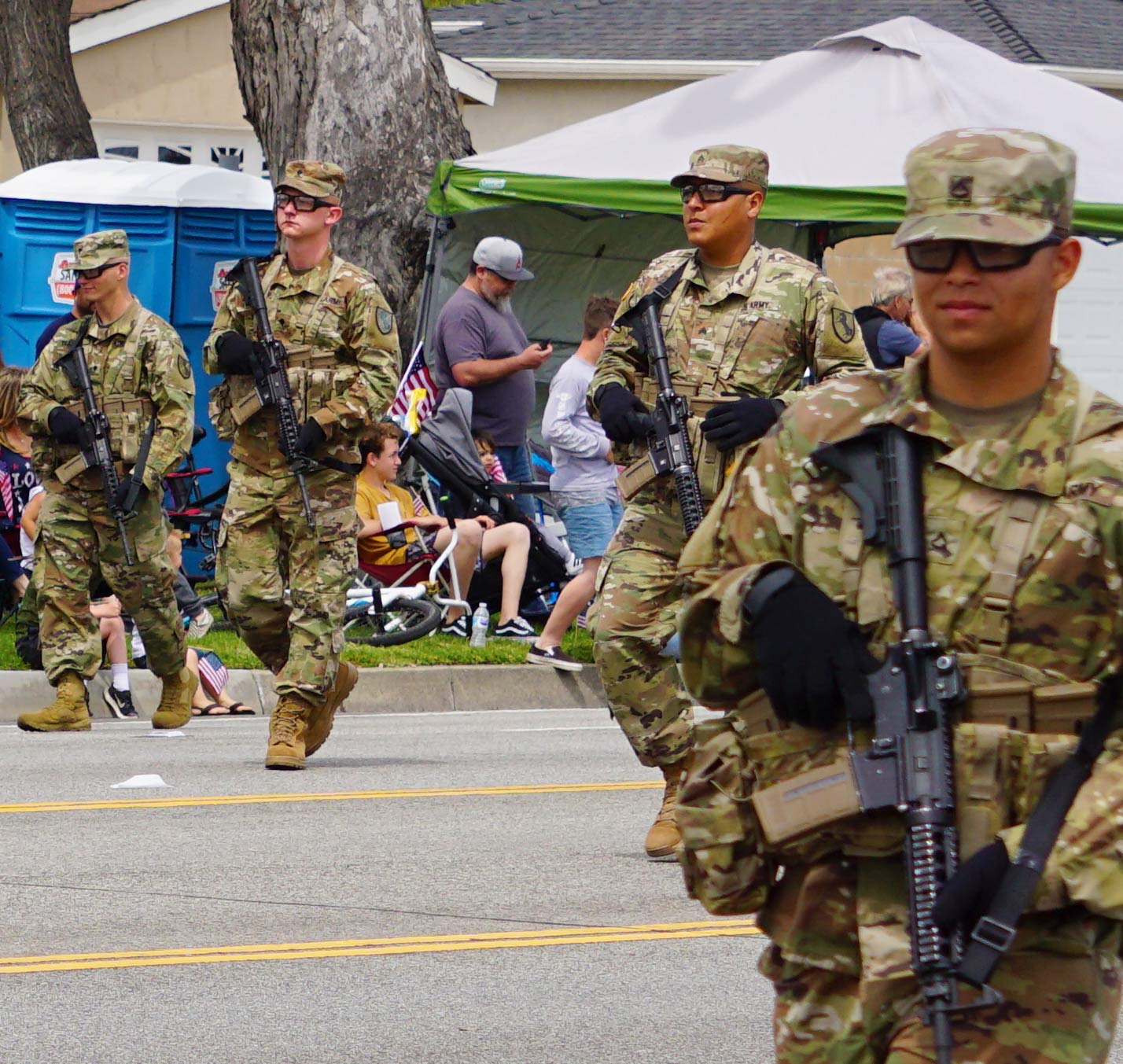 In another of my real parade memories, I am about to eat ceviche. I hold a paper plate in hand, scooping up a mixture of orange and white shrimp with cilantro onto a chip. The lemony taste on the tongue and the dribble on the chin are so vivid.

I watch the parade while talking with Mike Silva (white shirt with sunglasses on the head), grilling Argentinian sausages, carne asada (steak), and tortillas while flipping them with LA Dodgers insignia tongs. His brother-in-law, Jose Solano (black shirt), adds chicken to the grill.

Every year at Jose Solano's house along the parade route, family and friends gather. They have a bouncy house they set up for the kids in his background; and over on the grassy median beside the parade, they have a few red-covered tables set with food dishes, utensils, plates, napkins, and a cooler of drinks below. A large silver trashcan sits nearby. It's as if they've created a big kitchen outdoors.

Mike tells me their group is a mix of people with Costa Rican, Colombian, Peruvian, and Mexican heritage. They do this every year. Another family member tells me about the pink colored Peruvian salsa and the recipe for it with 3 red onions, 2 jalapenos, olive oil, lemon, and salt. I learn that the Argentinian sausage comes from El Gauchos Meat Market, then I'm offered a paper plate for food. On the table are a variety of bowls filled with ceviche, peppers, salsas, fried poppers, fruit, and chips. Later, more people drop by to chat and eat. It seems their generosity with food, drinks, and conversation makes the parade all the better.

Although I can't actually time travel, it was a nice trip back in memory lane to the Armed Forces Day parade and a delicious plate of food.