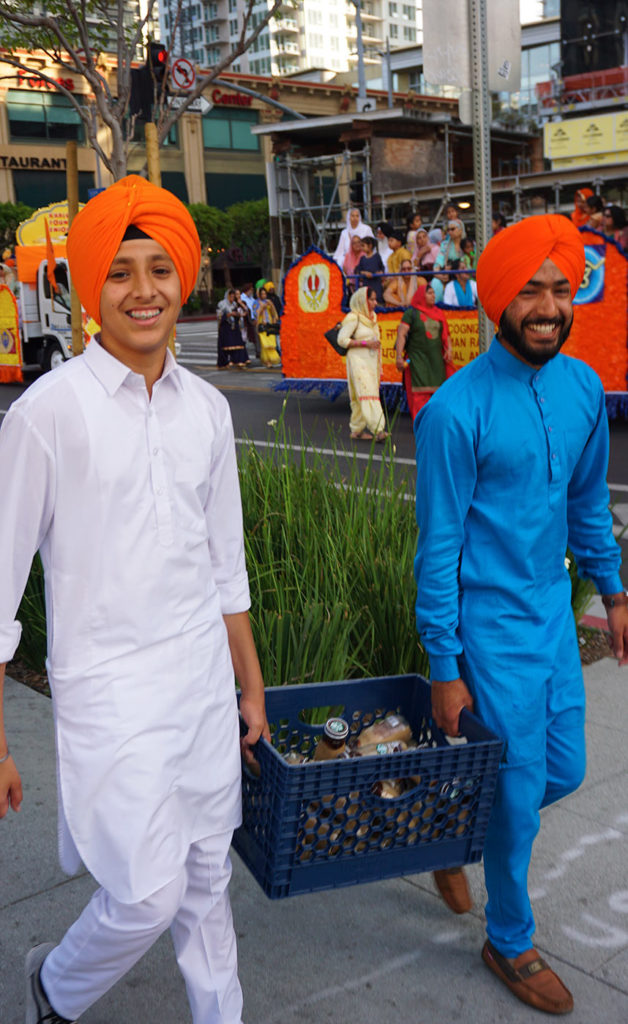 During these COVID-19 isolation times, the idea of altruistic behavior seeps into my thoughts as I read about people preparing meals, sewing masks, printing 3D face shields, and helping others in various ways. I wonder what guides these acts of generosity and charity. According to Kristen Renwick Monroe’s book, The Heart of Altruism: Perceptions of a Common Humanity, “what generates altruism is seeing oneself and others as human beings of value, not [necessarily] being religiously faithful or adhering to any particular theology” (p 129). Whatever the motivating factor - sociocultural, economic, biological, psychological, spiritual, experiential, etc. - there never is enough altruism in the world. Therefore, it seems an excellent time to draw attention to the free food and drinks offered during the Sikh Baisakhi parade and festive gathering at the Los Angeles Convention Center in past years. 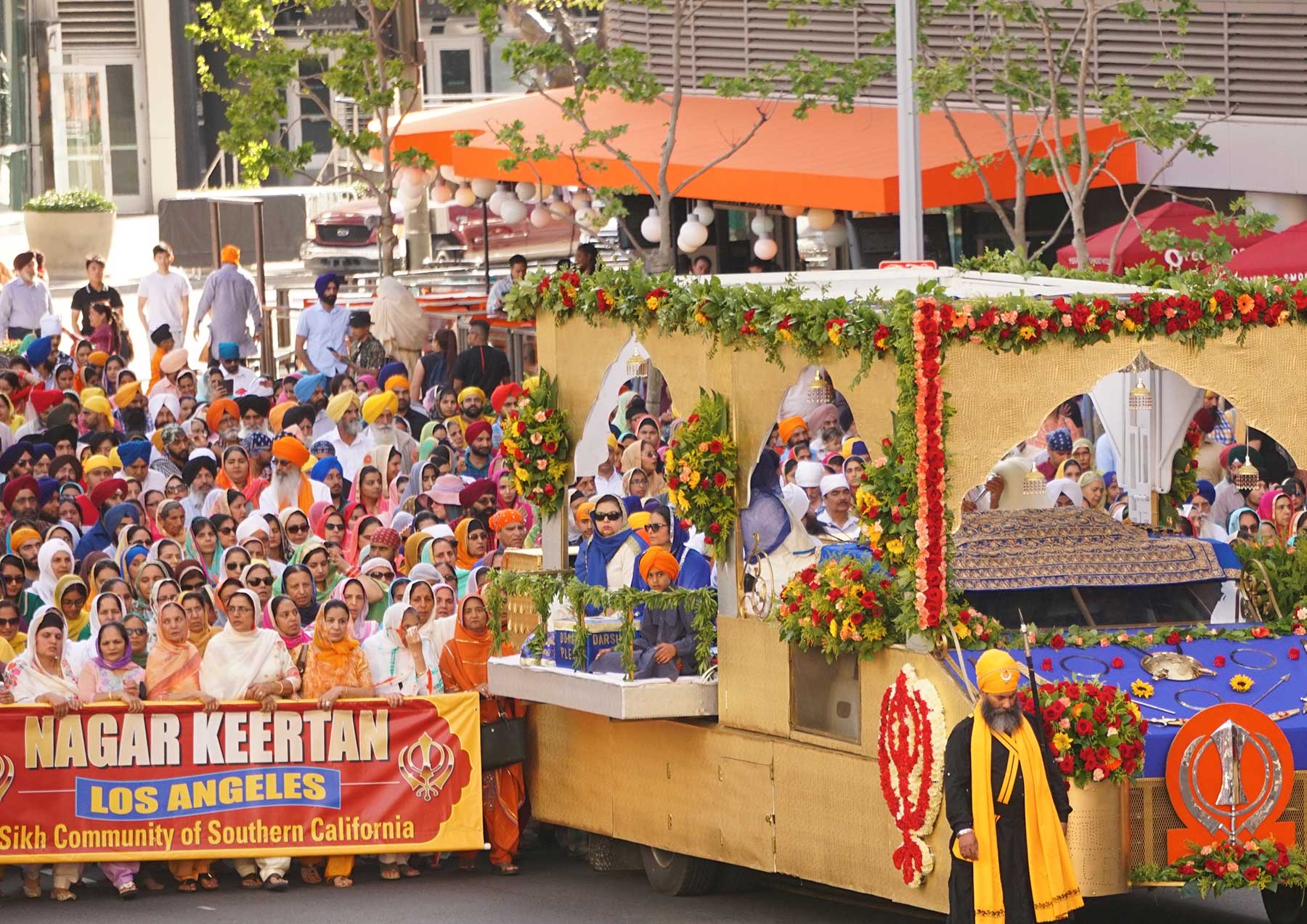 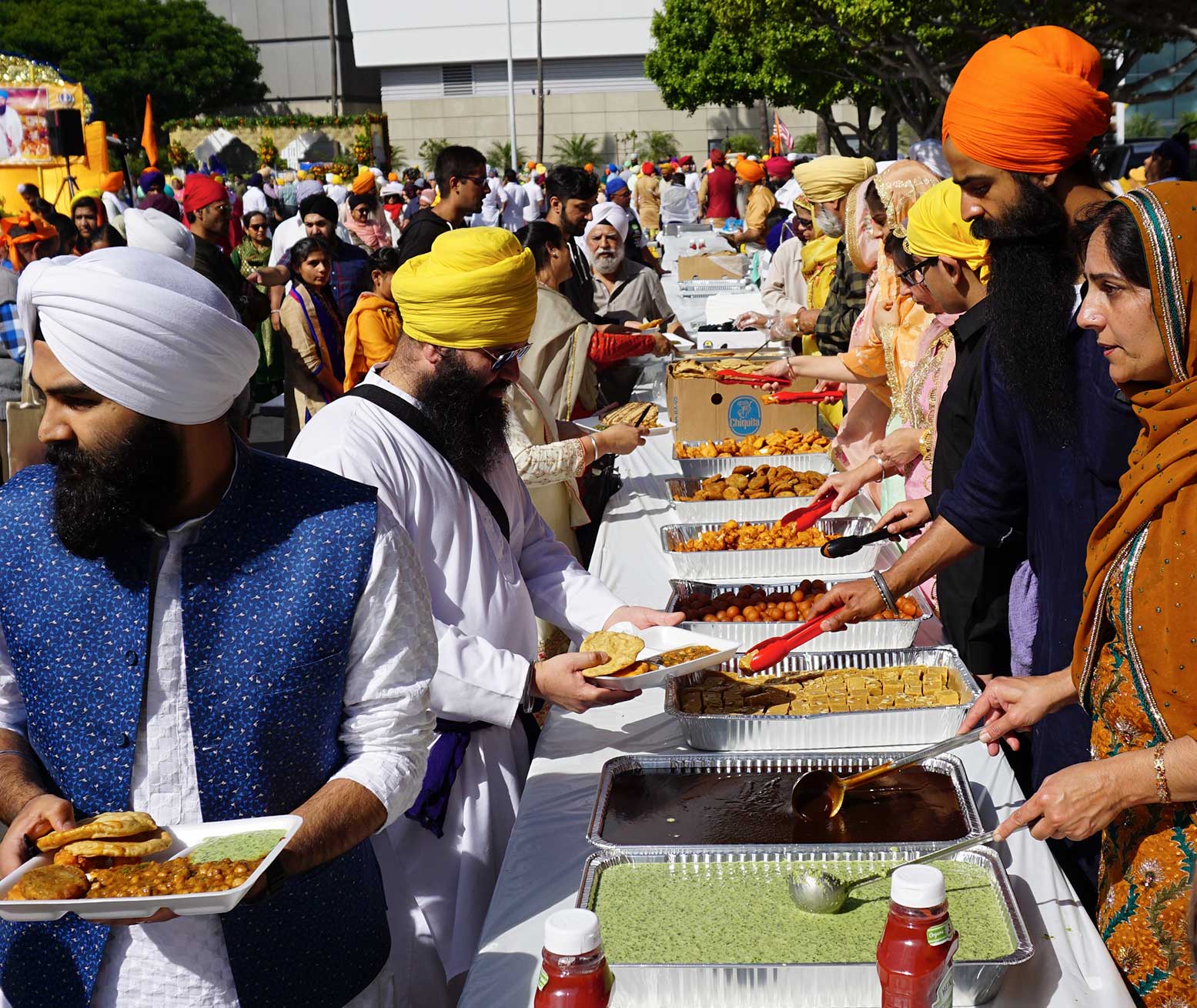 The Sikh community in Southern California is always active in sharing food with people. They set up langars (community kitchens) in local gurdwaras (Sikh temples) and in open spaces during festive events (i.e., Women’s March and the Sikh Baisakhi celebration in Los Angeles) offering free vegetarian meals to all. And recently, during these days of COVID-19 isolation, the generous act of sharing and serving food continues. For example, the Sikh Gurdwara in Riverside coordinated with the United Sikh Mission has distributed over 40,000 meals in the past four weeks.

Although Baisakhi celebrations began in the Punjab region of northern India, it is now celebrated around the world in Sikh communities. The event “commemorates the day in 1699 when Guru Gobind Singh, the 10th of the Sikh Gurus, bestowed and blessed Sikhs with the unique form, appearance and discipline associated with the Sikh way of life. Baisakhi also coincides with the first Spring Harvest and the Sikh New Year.” (Guruamdashram.org)

The Baisakhi (also known as Vaisakhi) celebration would have been in its 48th years in the Los Angeles area; however, it’s cancelled, as have many festive gatherings worldwide this year. For this celebration, thousands gather and events are scheduled all day long with spiritual music (kirtan) groups, Gatka (Sikh martial art) demonstrations, a market bazaar, speakers, children’s programs, langar, and the parade (Nagar Keertan, also referred to as Nagar Kirtan).

Last year’s Baisakhi was held on April 14, 2019 at the Los Angeles Convention Center as it has been for many years. This Los Angeles event is organized by the "Sikh Dharma of Southern California and Guru Ram Das Ashram, with the cooperation of many other Gurdwaras in Los Angeles County."(SikhDarma.org). As part of the early morning activities, a motorcade procession brings the Guru Granth Sahib from the Guru Ram Das Ashram in LA. This important scripture text the Guru Granth Sahib “serves as a repository of Sikh beliefs as well as a central point of reference in Sikh devotional life” (Gurinder Singh Mann, Sikhism, 2004:91)

In the afternoon, before the parade (Nagar Keertan), the Guru Granth Sahib is escorted on a long red carpet from the LA Convention Center to a float elaborately decorated in fresh flowers, gold-colored textured cloth, and Sikh symbolism. The manuscript receives royal treatment as it is carried on the head and fanned with a ceremonial flywhisk. On the float, it is laid on a raised platform, and the elaborate cloth around it removed.

Prashad offering is given to everyone, while a small cash donation could be made to the Guru Granth Sahib too.

An outside langar (communal food kitchen service) is organized in front of the LA Convention Center during Baisakhi, where all sorts of vegetarian food are prepared and served. Dishes vary from chana masala to desserts like gulab jamun, and even vegetarian pizza. A variety of fried food and fruits are available too. Some people will eat their meals before the parade while many eat afterwards. An assortment of drinks are also available from a yogurt drink to chai tea made in large stainless steel industrial size pots under tents, then scooped into pitchers and poured into cups. Bottled drinks, such as Starbucks mocha drinks, Gatorade, La Croix, Coke, Sprite, Squirt, Pepsi, Welch's juices, and water are kept iced in truck beds. During the parade, volunteers fill plastic crates with drinks from the trucks for distribution to the public along the route.

The altruistic behavior associated with langar is important to Sikh belief and practices. Everyone regardless of race, gender, caste, religion, or other distinction is welcome to share in the communal meal. Langar is something that not only offers sustenance, it enables Sikhs to show kindness in service of other human beings which relates to one of the fundamental principles of Sikhism: selfless service for others. Performing seva (selfless service) through langar demonstrates altruistic values, humility, and a willingness to treat people equally.

The Heart of Altruism: Perceptions of a Common Humanity by Kristen Renwick Monroe 1996 LINK

"Southern California Sikhs 'a godsend' for those in need during the coronavirus pandemic" by Deepa Bharath April 24, 2020 LINK

The Discussion Forum SikhNet "Altruism: An Act of Faith with Sikh) April 6, 2001 LINK

"What is Prashad in Sikhism" by Sukhmandir Khalsa, February 20, 2019 LINK

"Vaisakhi: What is the Sikh Festival and How is it celebrated?" in Independent by Sabrina Barr April 13, 2009 LINK

"Langar is the Sikh tradition of serving free meals, and all Canadians are Invited" Huffpost, by Harman Singh LINK