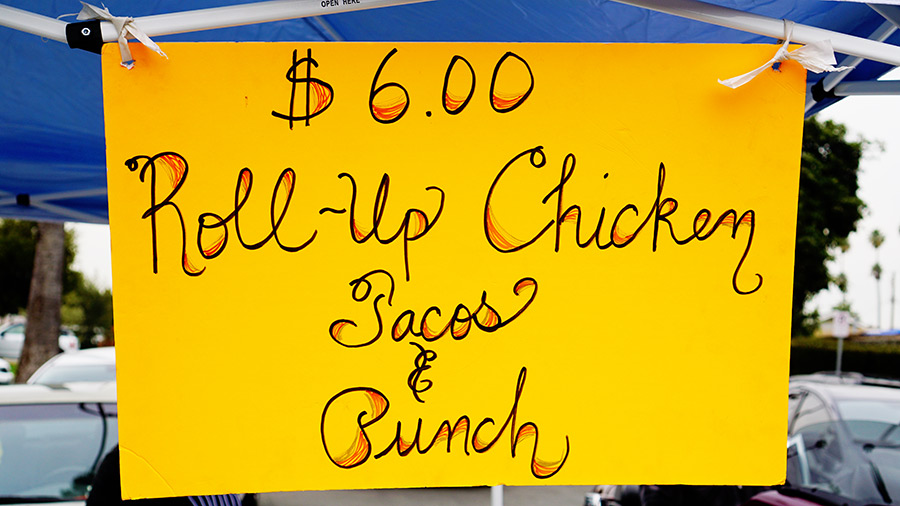 Not looking for candy in this parade.

What one quickly realizes at this parade is that it’s not only a time for honoring Dr. King, drawing attention to social issues, and bringing families and friends together. It’s an opportunity to share and sell food with the community.

Many people are bringing food to the parade. Some parade-goers bring sandwiches, chips, and drinks from home to share with family and friends while cheering on the local union floats, fraternities/sororities, krumping clowns, Soul Train dancers, and school bands. Other individuals and groups bring food to sell from mobile food carts and stationary setups with tables and tents on the sidewalk and grass.

The mobile street vendors selling food are common to many Los Angeles parades and parks. They sell ice-cream, paletas/Mexican fruit ice pops, packaged chips, elote y esquite/Mexican street corn in a bowl, and grilled hotdogs with peppers and onions. For years, the Kingdom Day parade was an event where groups marched to advocate the legalization of street vending. That was till 2017 when it ceased to be a crime.

Another type of food seller is the local person or group that shows up early with a table, tent, trays, and food. They bring their culinary expertise, entrepreneurial skills, and friends and family. Some cook their ingredients on the sidewalks. For example, chili is prepared in pans and crockpots and kept hot on portable heaters. The dessert food and drinks might be baked before the event and covered in cellophane, or customized at the event with various ingredients.

In 2019 and 2020, I spoke with a few people selling food alongside the sidewalks of the Kngdom Day Parade, specifically in the area of MLK, Jr. Blvd. before the Leimert Blvd. split. The following are photos and some abbreviated conversations about their food.

Calvin, barber for 27 years, set up a food tent in front of his business grilling $4 bacon hotdogs served with homemade guacamole mango sauce. He said that later he was bringing rice and beans, and brown stew chicken and potato salad. It's an annual all day party here with a dj and people hanging out for food, friends, and the parade. (January 20, 2020)

Will sold flavored snowballs $5 cups, $3 cones during the parade. He said, “You get snow cones, but not snowballs,” pointing to the machine and generator saying, “it’s shaved ice, not crushed ice.” The homemade syrups in all colors and flavors were made by him and his Aunty Martha, with Dreamsicle as the more popular flavor. (January 20, 2020) 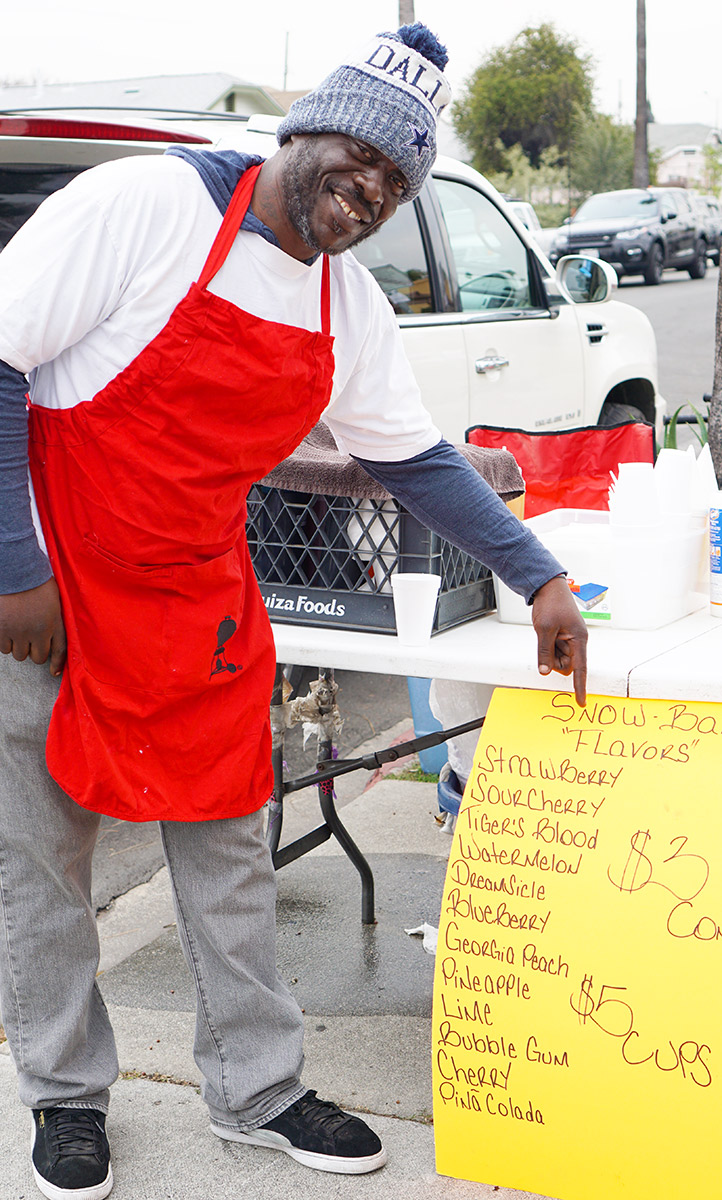 Martha Watts sold chicken rollup tacos with condiments (taco sauce, guacamole, sour crème) and homemade fruit punch for $6 this year during the 2020 parade.  She said, “I like to experiment in the kitchen – this is my passion.” Having talked with her and her daughter last year at the parade, and tasted her cupcakes at the 2019 parade, I knew anything she cooks I probably should eat. Her cooking history is legendary. She cooked for movie/television studio craft services and many others. Ever since leaving Columbia Mississippi at 18, moving to Los Angeles over 50 plus years ago, she has found ways to cook for others.  (January 21, 2019 and January 20, 2020)

Connie and family members of the Chambers Brothers were on the church lawn with tables, eco-friendly smoker (no charcoal), heaters, crockpot, selling what she said was “traditional parade food which is hot dogs, chili cheese Fritos (bag where you put cheese on) – all the bad stuff for you, but it’s fun. We are also doing keto-friendly stuff cause we know people are doing keto diet.” When asked if they’ve done this before, she said, “they had never sold food before, but they live in the neighborhood. Usually, they come out to the parade as a family, then afterward have a soul food dinner. But today we are hosting a fundraiser for our family reunion, the Chambers family.” Her uncles are the famous Chambers Brothers who did the song, “The time has come today” and so many psychedelic soul, blues, gospel, R&B hits. (January 20, 2020)

Lyla and her family had deep trays of barbecued food kept hot by canned heated. Her sign, showing their logo Backyard Barbecue, listed barbecue ribs, chicken, hot dogs, hot links from $2-$8. They came out a 6 o’clock in the morning to set up. She said they usually have macaroni cheese, baked beans, greens, potato salad, and a lot more. Originally from Texas, Lyla learned from her mom and dad to cook. She suggested it’s a way to keep a man and she’s been married 35 years, then laughing said, “he hasn’t left yet.” Cooking at home and at her job for the county of Los Angeles, she takes a lot of time to prepare food to sell at the parade. When asked why, she said,” It keeps me young. I gotta keep busy.” (January 20, 2020) 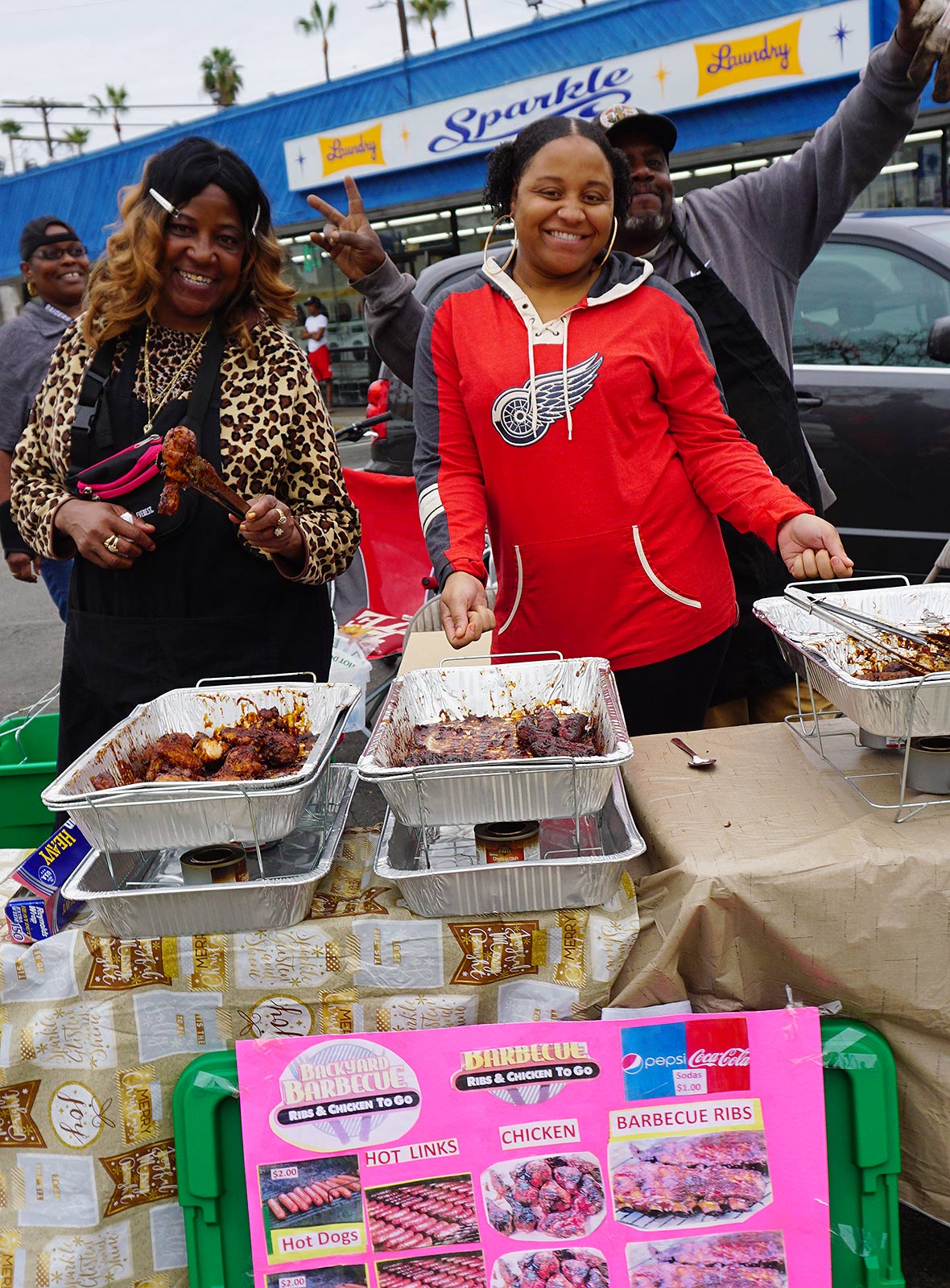 Dr. Susan Hamilton, part of the Jehovah Jireh Outreach Ministry Community Service We Care, had a table with cooking pots and hotdogs, polish sausages, potato pie, donuts, chili, nacho cheese, kosher pickles, and more in 2019. When asked why she was cooking, she said, “I do it cause I care, and I like to feed people and the homeless and those who are not homeless.” I met up with her again after the 2020 parade when she was cleaning pans. She had one apple pie left. I almost took it home, but I had my hands full with containers of barbecue and a piece of the potato pie (*sweet potato pie). (January 21, 2019 and January 20, 2020)

Chef Roc, LA Trade graduate in culinary arts, brought his “best coffee cake in the world” to the streets of the parade. He said, “I have a double your money-back guarantee on my coffee cake” and makes it in both regular and peanut butter flavors. He said the Jamaican music pulled him in and he just started selling the food here by the parade route. (January 21, 2019) 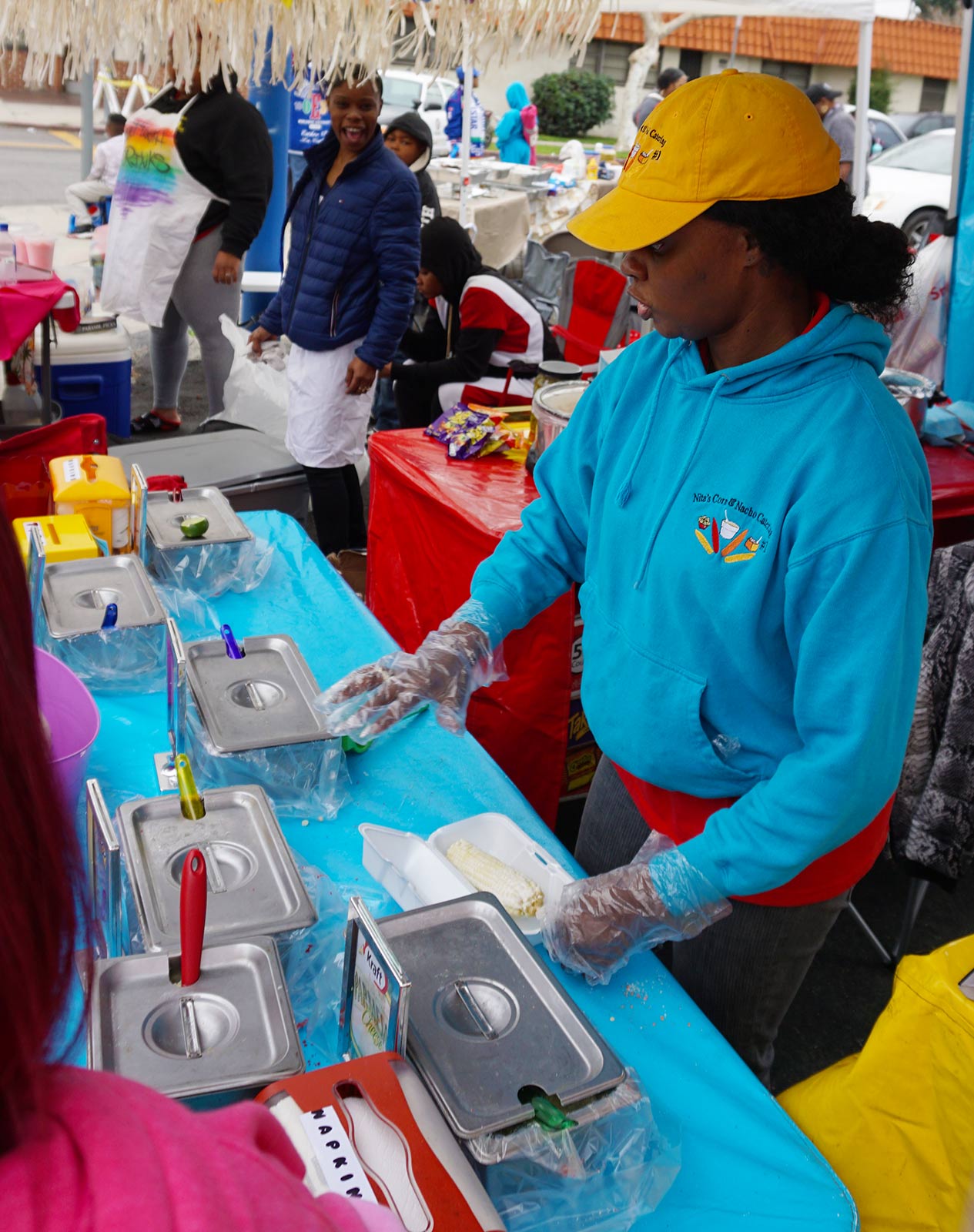 Okay, this is more than ten foods and I haven't yet mentioned the many mobile food vendors rolling down the street selling cotton candy, ice cream, churros, elote y equite, and hotdogs. (January 21, 2019 and January 20, 2020)