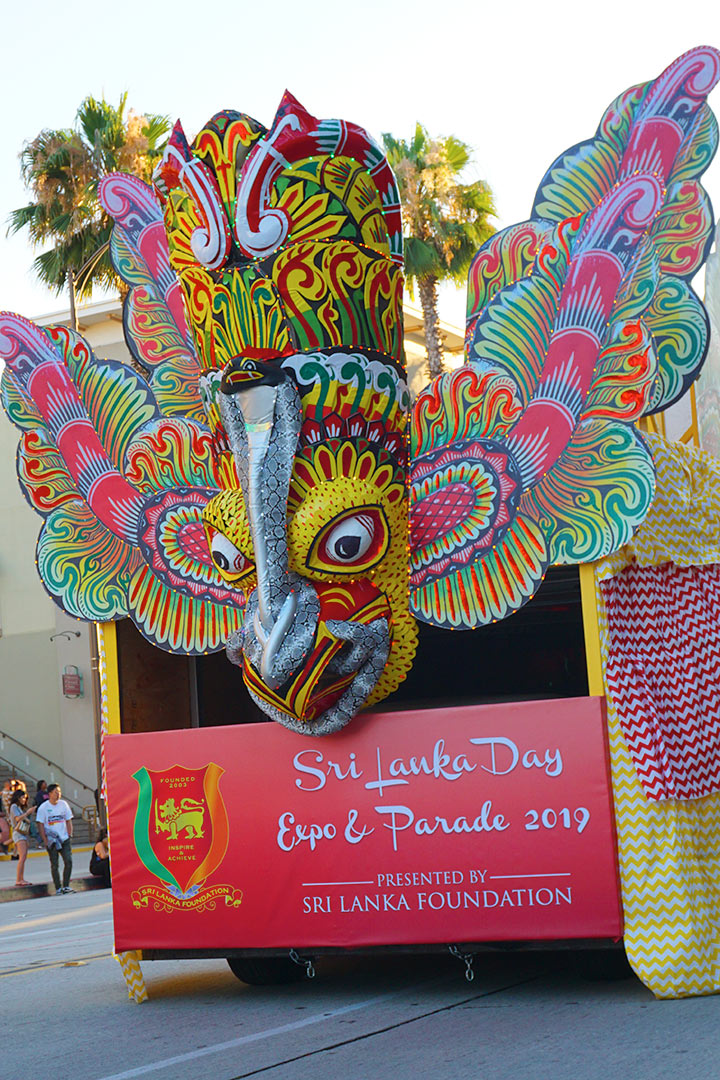 Can I visit world cultures without leaving Los Angeles, California?

Yes, you can, and no plane ride is required, just access to a car. It’s possible to have a day trip to the Netherlands, Sri Lanka, Peru, Switzerland, or some other country while living here. Having 103 Consulate posts appointed by home governments in LA and some located in San Francisco, means cultural outreach activities are likely. Why? To connect people to world cultures or to introduce and promote one’s home culture to other people living in the United States.

It’s as if a World’s Fair/Exposition with pavilions, booths, and parades is annually happening in LA. I know that these massive, orchestrated international expositions showcasing different countries culture, economy, and achievements still happen worldwide; but I’ve missed attending them in recent years, apart from briefly experiencing the preparation stage in 2010 of the Shanghai, China World Expo.

Until recently, I had not thought of LA as being my little window to mini World’s Fair pavilions. Yet it is, with no travel fatigue and costly expenses because this a multicultural city. 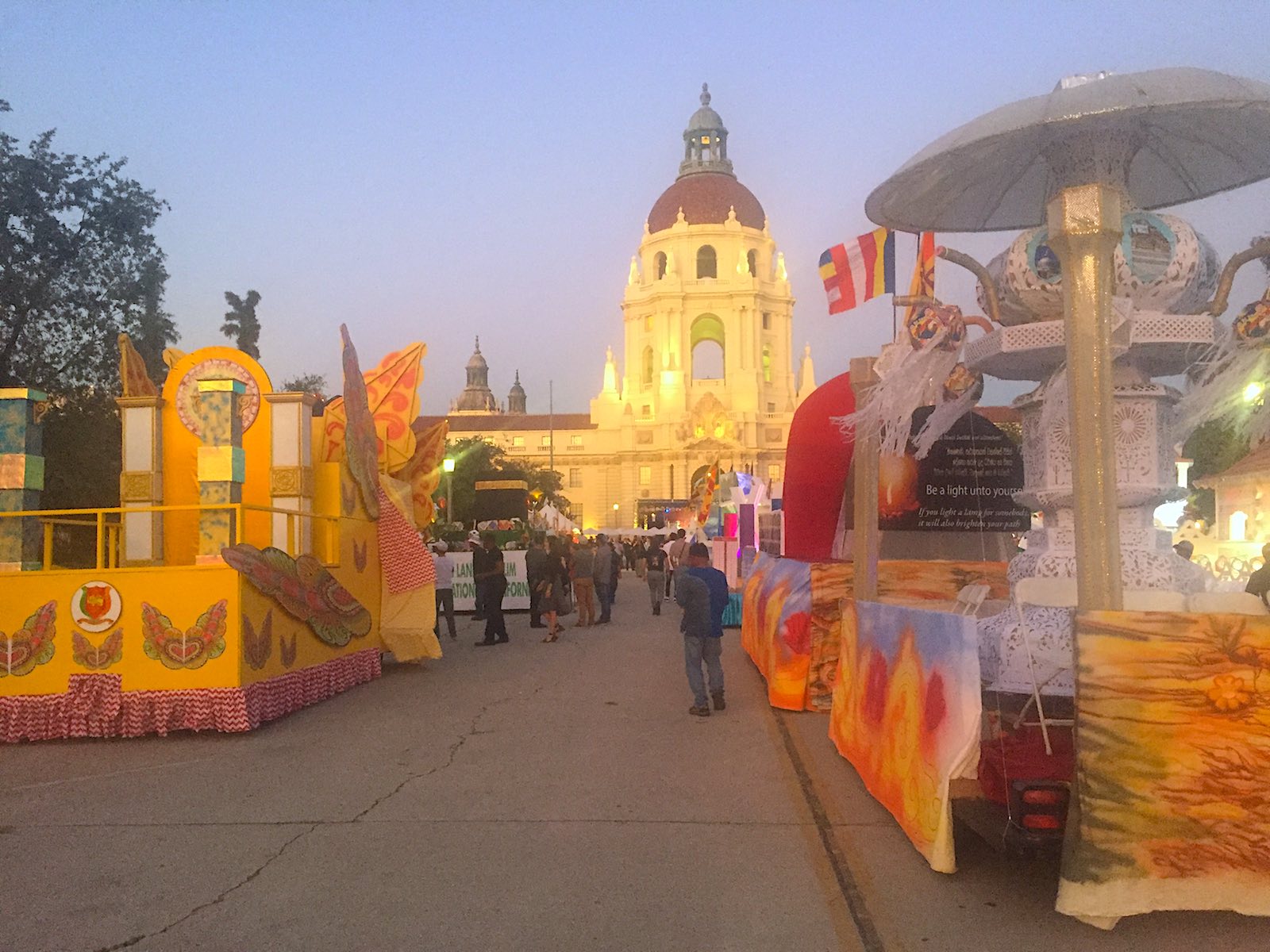 Last week, I attended a festival and parade showcasing the Sri Lankan culture in nearby Pasadena. It was a model event, a little snow globe, of how to perfectly orchestrate an event as if it were in one of the World’s Fair Pavilions. Possibly, those green mountains in the backdrop made it even better with the picturesque Pasadena city hall building and nearby El Paseo shopping area.

What surprised me most, was oddly the paper program created by the Sri Lanka Foundation for "Sri Lanka Day Expo and Parade, July 20, 2019. It was well-designed and clear in explanations about everything. If I had a question, it was answered in this program. It explained details about the traditions on display, parade entries, retail and food vendor products, cultural performances, and even behind the scenes details of planning the festival and constructing parade floats. It was the interview I wished for, all in a program with color photos and explanations. There were even sketches from the parade floats in the planning stage and the associated symbolic meaning of costumes and performances.

What could a paper program tell you?

This amazing program was a high quality printed booklet explaining the whole event choreography and details about Sri Lanka. The intro of the program sets your scene for a trip to Sri Lanka: the lion nation, 21 million people, 2500 years of recorded history, Sinhala, Tamil, and English language spoken, and people of Buddhist, Hindu, Christian, and Muslim faith all living on this tropical island known for its spices, tea, and having a UNESCO recognized 8th Wonder of the World. And there’s a map in case you want a visual.

Who organized this Pasadena event and why?

The program giveth. It was the Sri Lanka Foundation, with the founder, Walter Jayasinghe, M.D., M.P.H. that first planned this fourteen years ago. They wanted to promote Sri Lanka heritage, food, and people for not only Sri Lankans in the area, but also for others to learn more about them.

Yes, every month on the full moon in Sri Lanka, and it is called perahera, a Sinhalese term for parade or procession. In Pasadena, the annual perahera is known as the Pageant of the Lanka. Around 6PM the parade was led by two people cracking whips made of jute and tree bark. They helped clear the route as their whips made sounds representing thunder and lightning. Though, when I watched the parade, it also seemed that a volunteer in a sari with radio and earpiece and the MC on his mic helped the audience get situated for the parade.

Following the whip crackers, there was an ornately dressed boy in maroon velvet jacket of thread/sequins and four cornered crown-like head piece. The program explained that he was representing an official from the time of the monarchy, and was said to “convey orders of the king” that a perahera was to happen. It also stated that Sri Lanka was ruled by 181 kings beginning with King Vijaya (543BC) to Sri Vickrama Rajasinghe (1815). Sri Lanka has quite a long, complicated history that had its own kings, then control taken by Portuguese, Dutch, British, and back to the people of the country. (Ref) An event like this makes a person want to learn more about the country's history.

And there is more (as the photos above demonstrate)

In the program, there were many elements of the parade presented, such as the decorated mechanical elephants, lion dancers, and performers with baskets for carrying tea leaves. Even stilt walkers had descriptive explanation. It was said “stilts are an example of human ingenuity and adaptation to difficult situations and surroundings” and now I think I can say that I have a greater appreciation, beyond balancing skills, for stilt walkers.

One group that stood out were the women carrying circular shades held on decorated red-orange hued sticks. Their role was explained in the program, though I’m adding a little more detail here. These shades they carried named sesath were made from organically dyed talipot palm and mica. In historical accounts from 3rd century BC, the sesath were said to have accompanied Theri Arahant Sanghamitta and her group of Buddhist nuns when she journeyed to Sri Lanka. She was the daughter of the Emperor Asoka who ruled India. Her brother, Mahinda, had already introduced Buddhism to the people of the island, but could not ordain women into the Order, so his sister was sent with a Bo tree (Sinhalese language)/Bodhi tree sapling, known as the sacred tree in which Siddhartha Gautama attained enlightenment and became the Buddha. Theri Arahant Sanghamitta has been credited with beginning the Bhikkhuni (Buddhist nun) Order in Sri Lanka. (Ref)

Another, splendidly dressed group wearing costumes similar to the first parade official in the maroon velvet outfit were identified as custodians of the temple in the program. They wore the different colored Nilame costumes, four-piece outfits, including the mul anduma (reference to the long white cloth wrapped around the body). In the Esala Perahera Fest in Kandy, Sri Lanka, these custodians are said to carry a representation of the sacred tooth relic of the Buddha, known to be housed in Sri Dalada Maligawa/Temple of the Sacred Tooth relic. 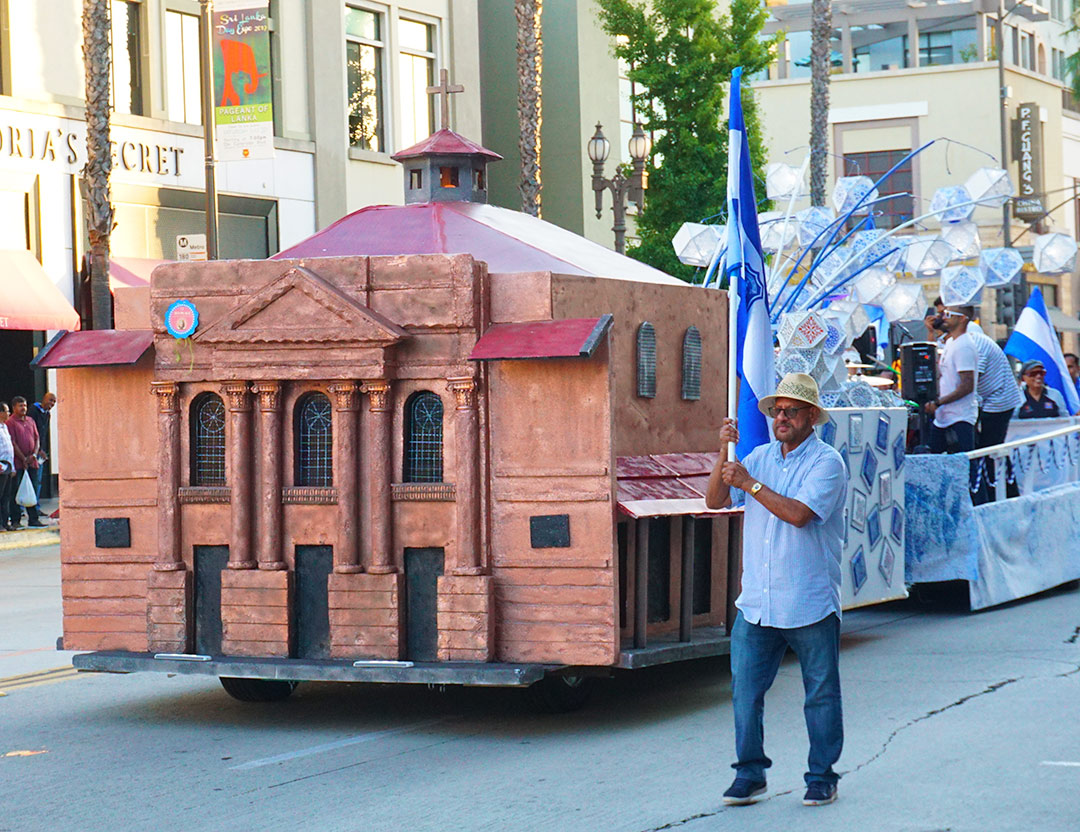 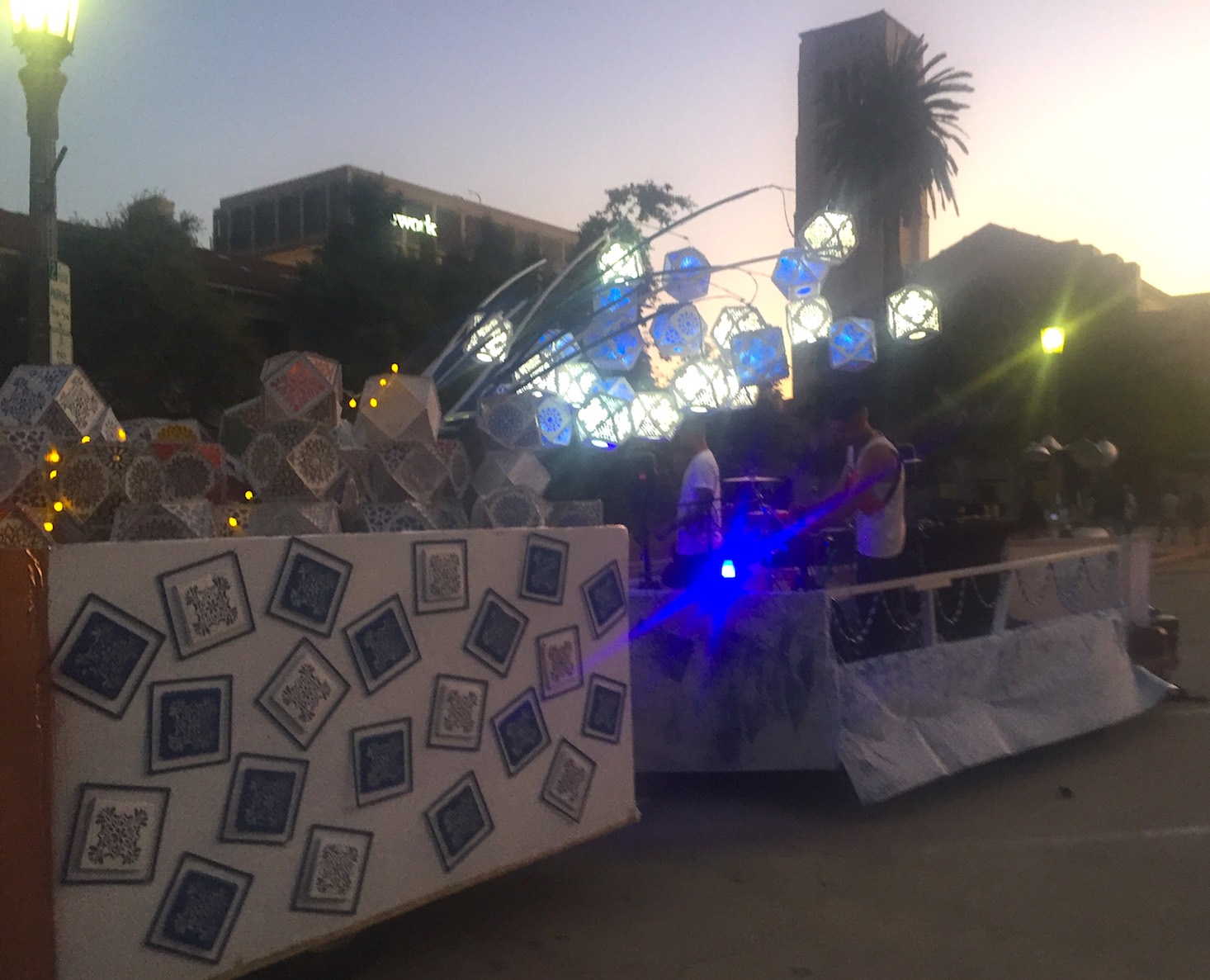 Floats that say so much more (above 2 photos)

Some of the symbolic imagery in the parade reflected Sri Lankan institutions, traditions, and even made a reference to the recent tragic Easter Sunday bombings (April 21, 2019). It was the St. Joseph’s College Colombo float (Catholic educational institution in the city of Colombo, Sri Lanka) that presented a multi-faceted float addressing this recent history. It began with an intricately designed foam version of the historic chapel building of the institution. Then it was followed by what is described in the program as “the souls lost in the Easter Attack” who are never “unseen nor forgotten” all symbolized by dim lights and lanterns. Lastly, on this float was an upbeat and modern music group meant to represent “resilience of a nation” while offering the crowd a live performance of funky dance tunes.

Religious symbolism on parade (above group of photos)

A number of religious faiths were presented on colorful floats built on top of U-haul trucks and attached truck beds. They each traveled the circular parade and as dusk settled in, some of their LED lit designs took on a more vibrant appearance.

Religious affiliation was denoted in float signage, iconic symbols, and sometimes the float rider's recognizable religious garb. For example, one particular float combined multiple religious symbols to show how Sri Lanka is united by recognizing its nation’s different religious practices. On the float, women represented each faith, some in distinctive religious clothing. Two women in white nun habits stood beside the cross, bible, and sign that read Sri Lanka Catholic Foundation of Southern California. A minaret on an amazingly, detailed miniature mosque symbolized Islamic faith and a woman in hijab head scarf stood nearby. Buddhism was represented by a stupa structure. And a pyramid, with its triangular points was covered in image of multiple deities reflected Hindu philosophy.

Having recognizable and symbolic imagery was common trait of many of these religious affiliated floats. The Sri Lanka Muslim Association had a striking structure representing the Holy Kaaba in Mecca, Saudi Arabia. Although tiny, this replica of the Kaaba did have semblance of the actual sacred shrine that stands 42 feet high and 36 by 42 feet around. (Ref) The Los Angeles Buddhist Vihara temple float included a large LED lit lantern with decorative paper carvings to symbolize wisdom of the Buddha. Their Buddha statue was haloed by painted sunburst yellow, red, and blue accompanied by written messages, such as “We are shaped by our thoughts; we become what we think; when the mind is pure, joy follows like a shadow that never leaves” and other writings. Also, flags of Buddhism, United States, and Sri Lanka flew overhead. The Sri Ratana International Buddhist Center (SRIBC) included not only a Buddha statue and temple, but also traditional and landscape imagery associated with the country. The Lankaramaya Buddhist Institute (La Puente, California) had a Buddha figure with an exciting LED lit rotating pattern that showed up best at night and other intricate decorations. The Holy Family Convent float (Bambalapitiya, Colombia, Sri Lanka) a Catholic girls school had a church chapel. Stained glass windows known for teaching stories of the Bible were part of the church design and a large lantern meant to represent the light of the world. Although, not on a float, a small group performed what was associated with the Kawadi dance known as a lively, ecstatic religious dance common to Kataragama, a town that is known for Buddhist and Hindu pilgrimages.

The end of the parade

When the sky was darkening, many of these LED lit floats appeared as magical street art. In a way, visiting the Sri Lanka Day Expo and Parade, felt as if I had traveled to Sri Lanka. Possibly, the LAX airport imagery and plane on one of the floats representing Upul's travel agency made it seem even more as if I had just taken a trip to Sri Lanka via Pasadena. 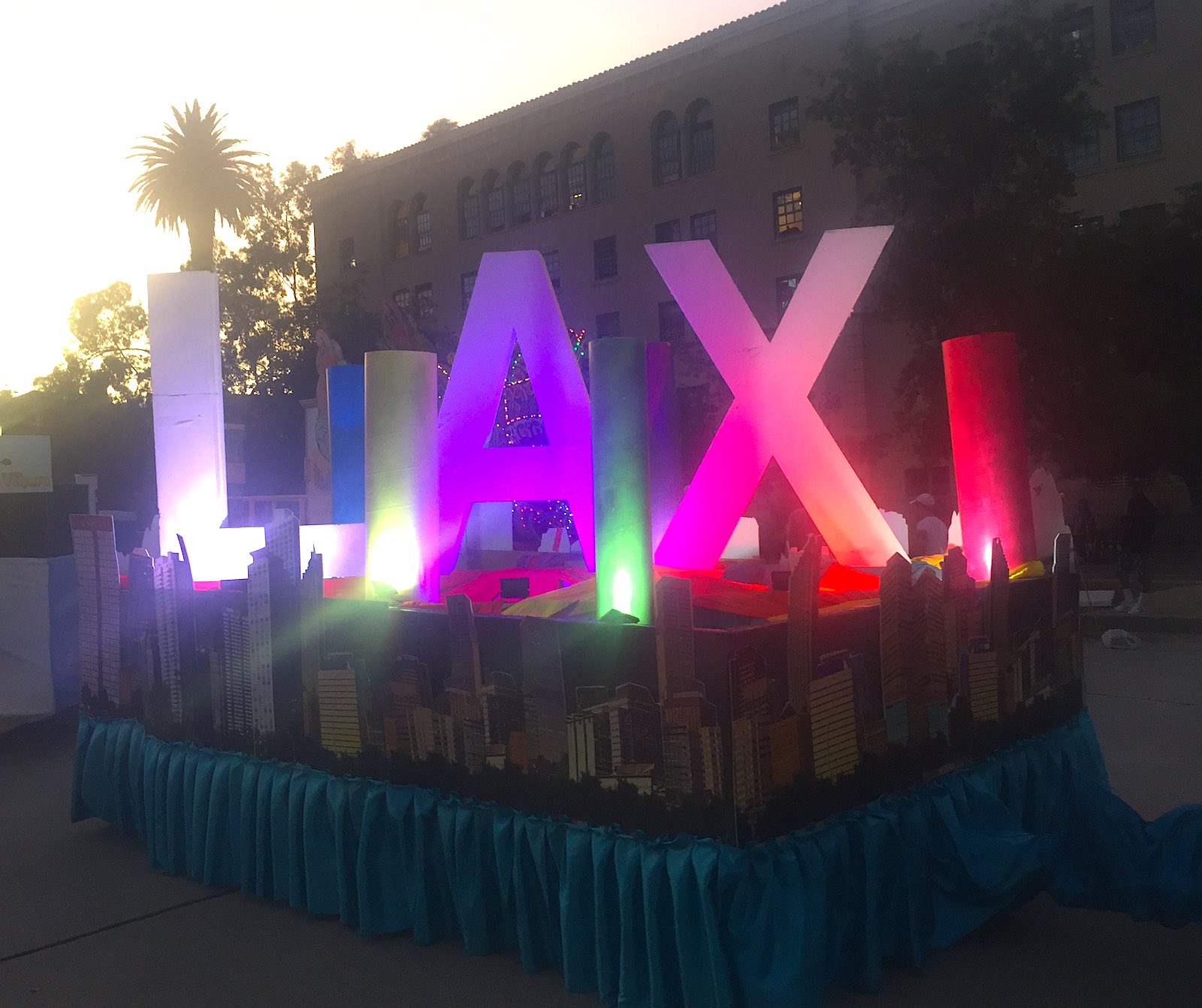 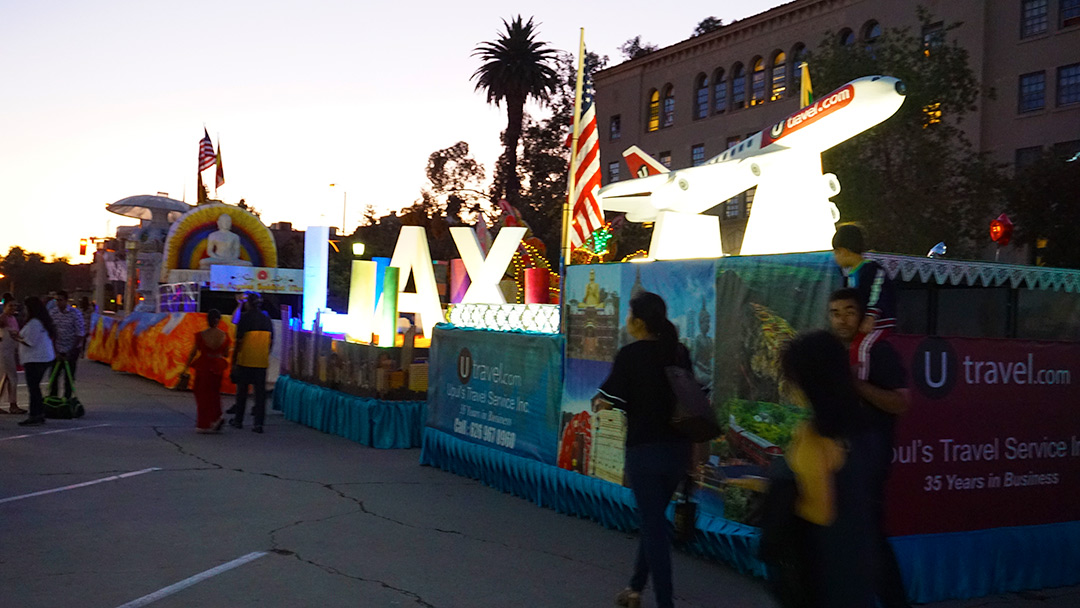 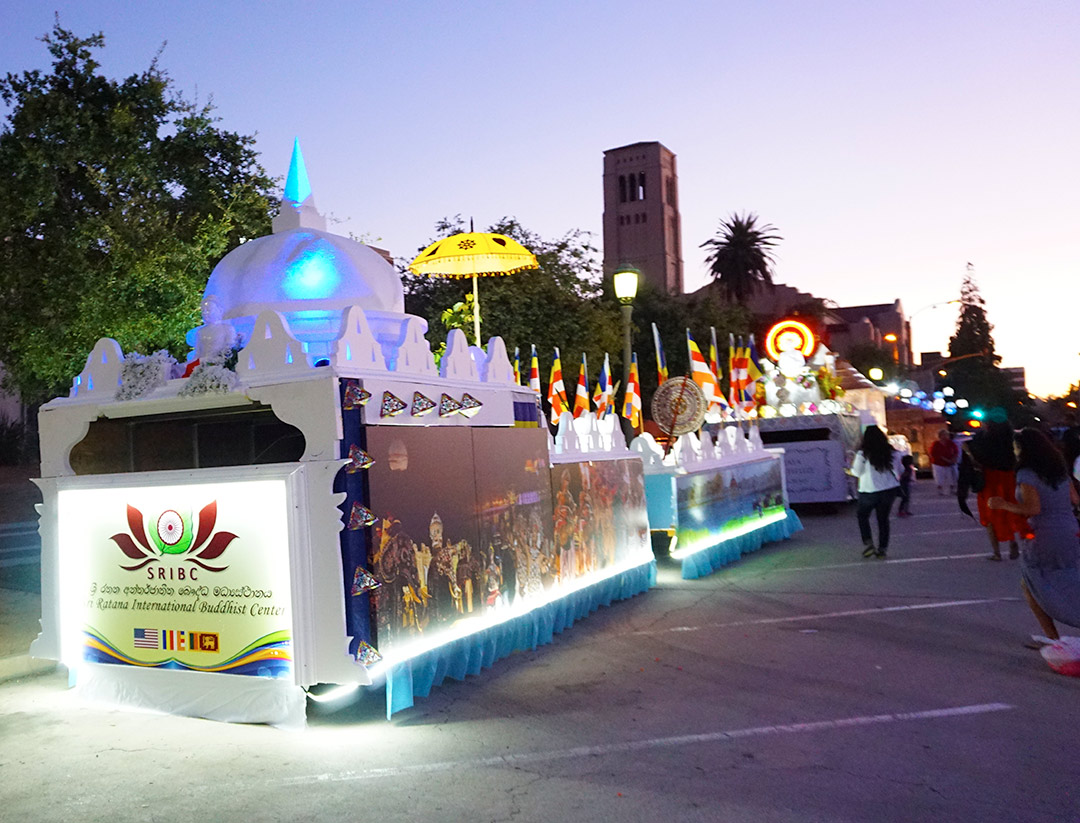 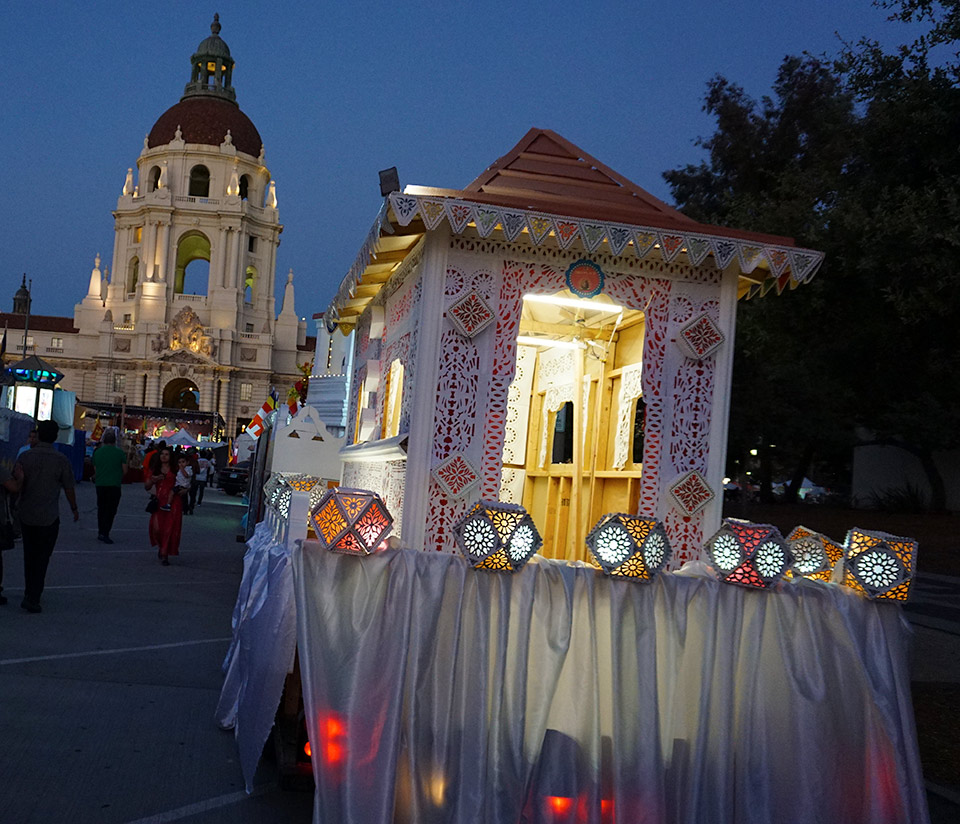 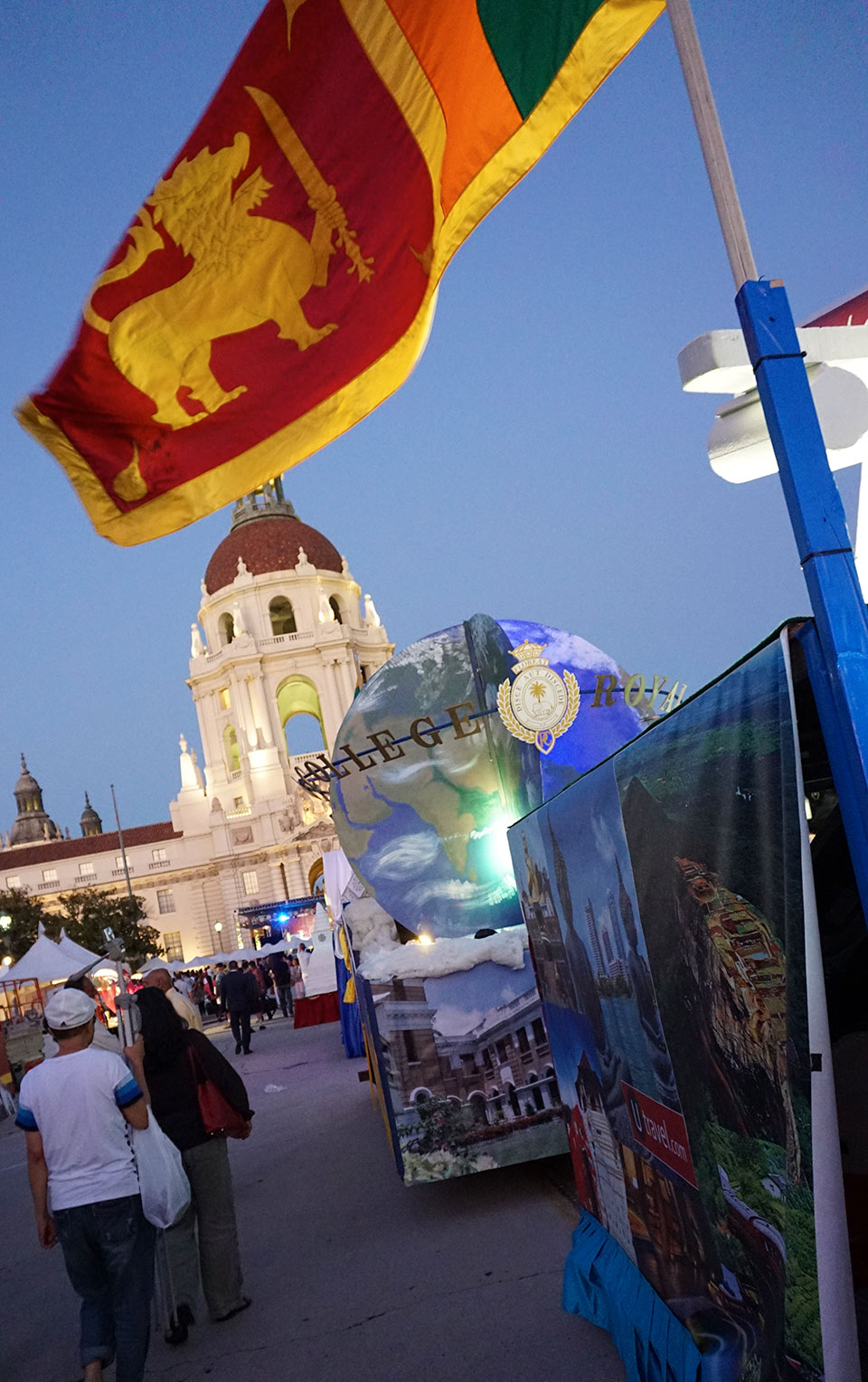 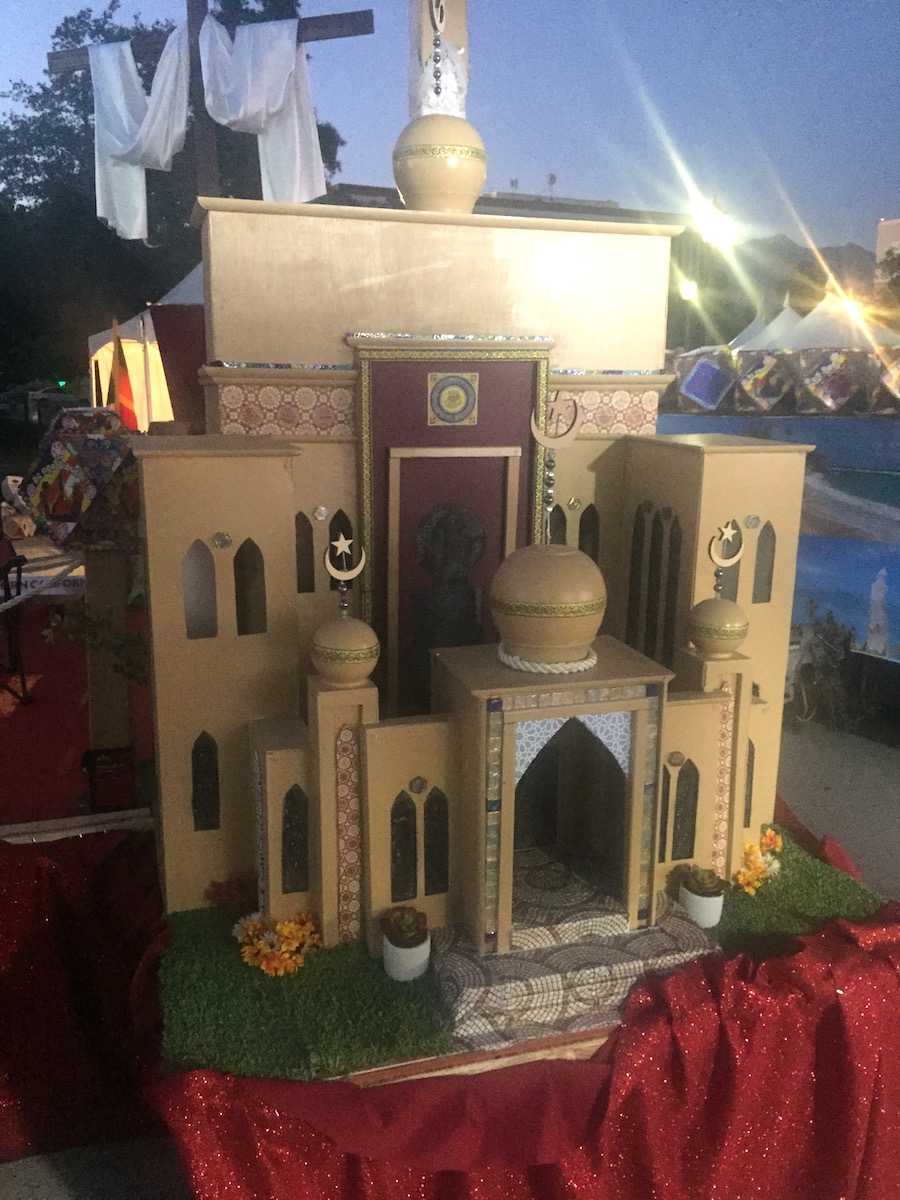 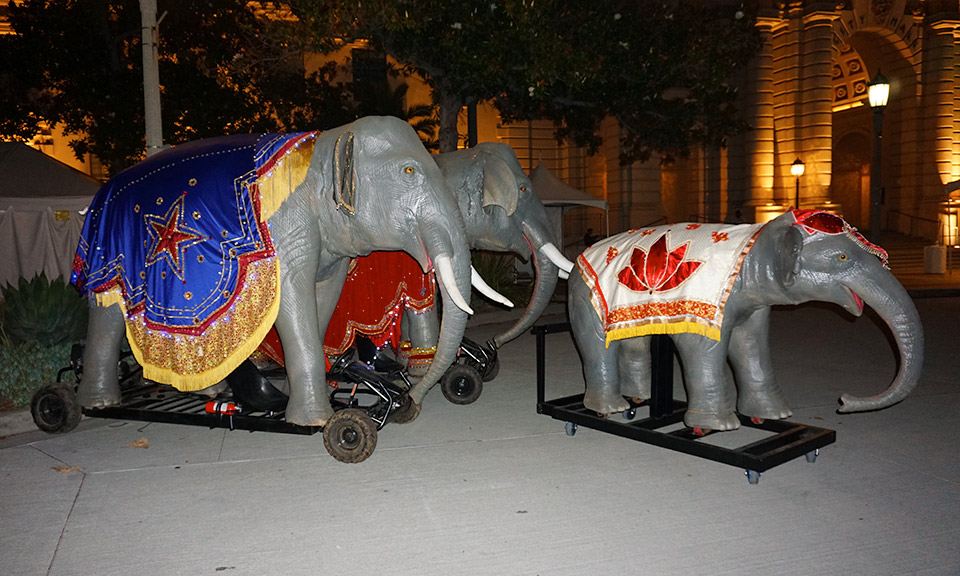 I did not include all those who participated nor the program booklet but it's better to see it in person and have a hopper, lamprais, or kottu roti before the parade starts.