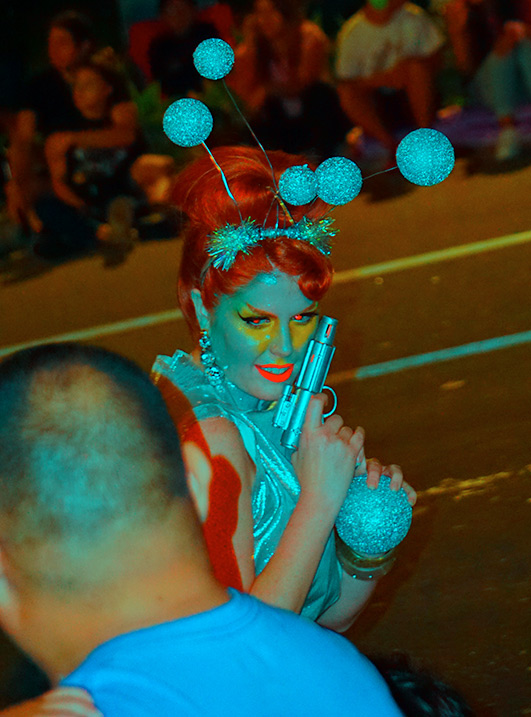 Watching the night time Anaheim Halloween Parade Saturday, October 26, 2019, was thrilling with costumes, face paint, floats and walking groups that lit up the night in scary and fun ways. At the same time, it was my battle with my camera’s ISO, shutter speeds, and aperture f-stops refusing to give me the picture it showed on the screen.

I wasn’t screaming with my outside voice, but inside, I had this dialogue, “That is the biggest slice of cake float I’ve ever seen, and it’s Charles Phoenix, the Ambassador of Americana on it. Yes. Ok, zoom lens this, he’s under a street lamp. (Click) Why is it too dark still? He’s getting closer, get the 50mm lens on. Try a slower shutter speed to brighten it up. (Click) What? It’s too blurry. Come on camera, please? He’s in front of me; I can still get him waving and the flag of Cherpumple. Up the ISO to 1600, no, go to 3200, there’s no street lamp. Please camera machine. Why am I pushing the button and nothing’s happening?” When the camera does click, it creates a bright, noisy, and blurry picture, and now the cake is down the street. 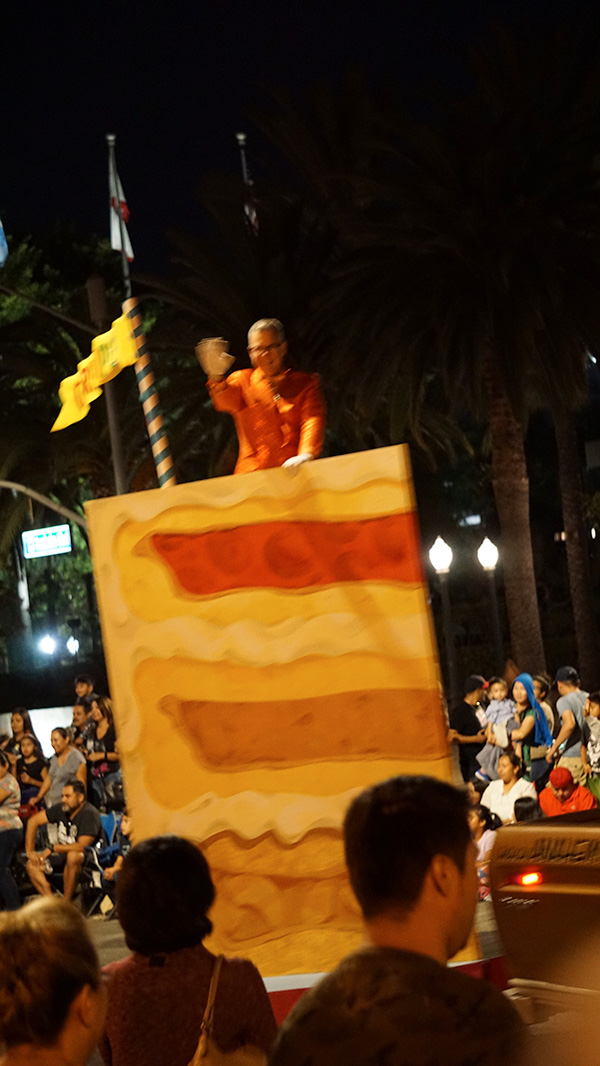 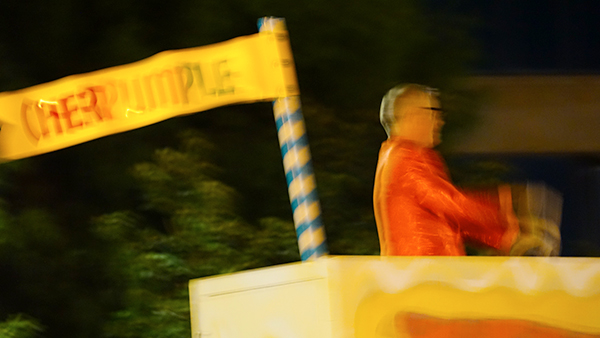 This camera dilemma plays out repeatedly for me during night parades. I hope for a few interesting photos along with some blurry but readable banner photos to help me identify these groups on parade. I’m not ever disappointed for long, even with my camera troubles because I’m there, experiencing it. My photos may not show how exciting it is to see a night parade, but I’ve loved them ever since I was a kid seeing Mardi Gras night parades. There’s a different energy, an uninhibited feeling that the night brings out in both participants and audiences. The Halloween, Day of the Dead (Dia de los Muertos), Zombie walk, and Christmas parades I’ve photographed at night, all had this strange, wonderful energy, where things are more playful and fleeting in the dark.

Need more hands or something

Although I still haven’t found the exact way to photograph a night parade due to all the unexpected factors of people moving, random light sources, and my wanting to stay mobile, I continue to experiment. I do have a few strategies, though I can’t say they always work.

Sometimes, I have shaky hands or stand too far back. Other times, I need to wave and scream for a group, and at the same time take a picture, care for a puppy dog, and chat with people. I guess I could try harder to be a better night photographer. Or, better yet, wish to be a human octopus with good tentacle dexterity or a multi-headed and armed body that morphs a couple times a year for night parades. I’m sure I’ll fit in at the Chewbacchus night parade in New Orleans with that body, though maybe not so much at the Christmas night parades. 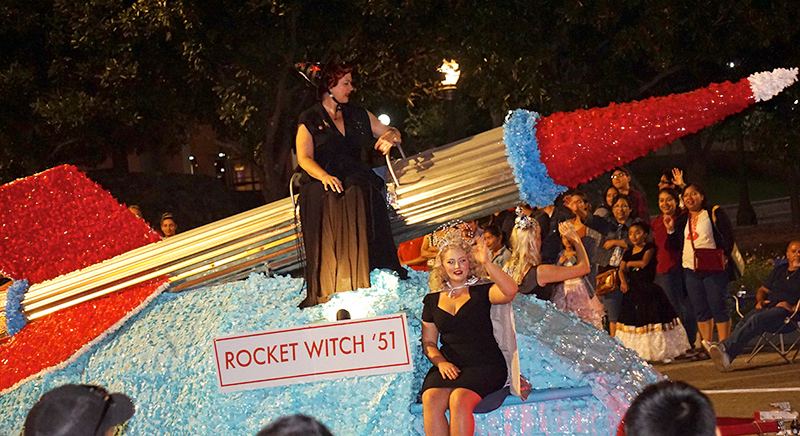 The Anaheim Halloween parade has a long history beginning in the early 1920’s with famous baseball players as Grand Marshals (Babe Ruth and Walter Johnson). It was initially an alternative event to keep kids from doing more mischievous things during the holiday. All of this was happening before Disneyland was built. It was said that “Walt Disney got involved in 1953, sending six float designs as a bouquet to the farm town that, only months before, he had chosen as the place to build Disneyland.” (The Orange Coast magazine). In the 1960s it was televised. By the 1970’s it was drawing in large crowds. There was even a photo of young Jodie Foster as a Grand Marshal (The Walt Disney Company).

Eventually, the downtown lost its main street and the parade was scaled down. It began a revitalization period in the late 2000s and the Center Street Promenade seemed to bring back that downtown atmosphere. In 2012, the historical float traditions were re-visited by designers, Kevin Kidney and Jody Daily, and they along with volunteers created some replicas based on photos of the Flying Sasser (1953), Rocket Witch (1951), and other designs. (KCET Artbound article, Orange Coast Magazine) The event now has people lining the streets with chairs early in the afternoon before the parade. Other activities are scheduled earlier in the day: children’s costume contest, dog costume contest, puppet theater, pumpkin art design, art and food vendors, and then the parade at 6PM. 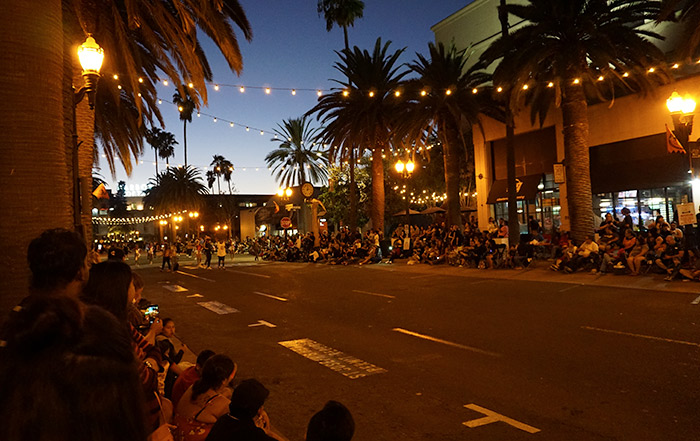 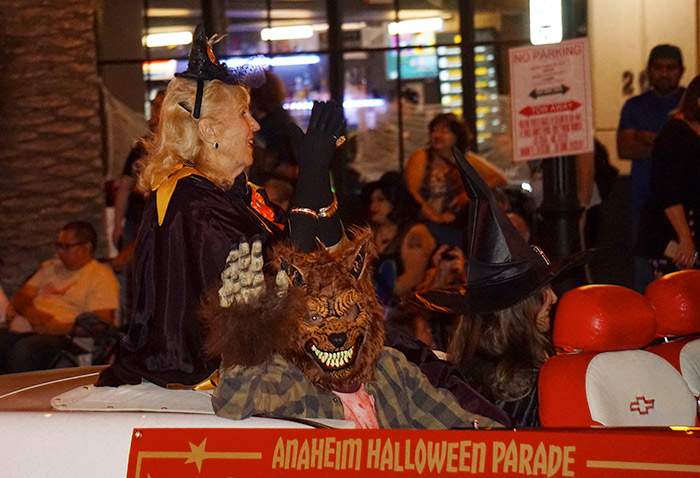 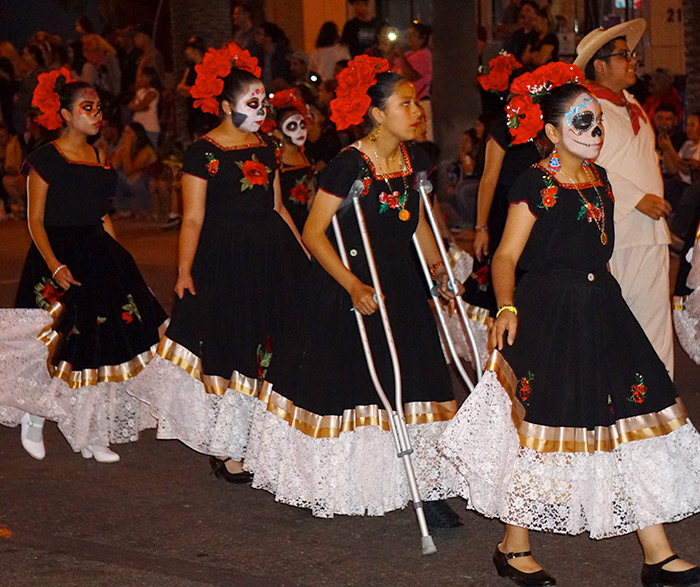 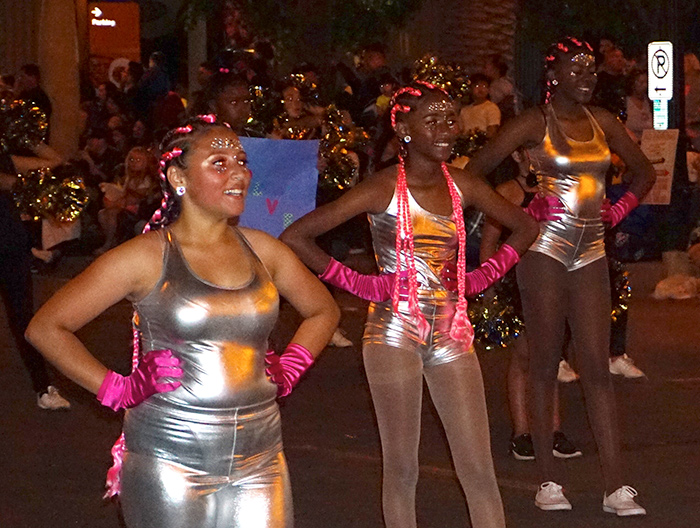 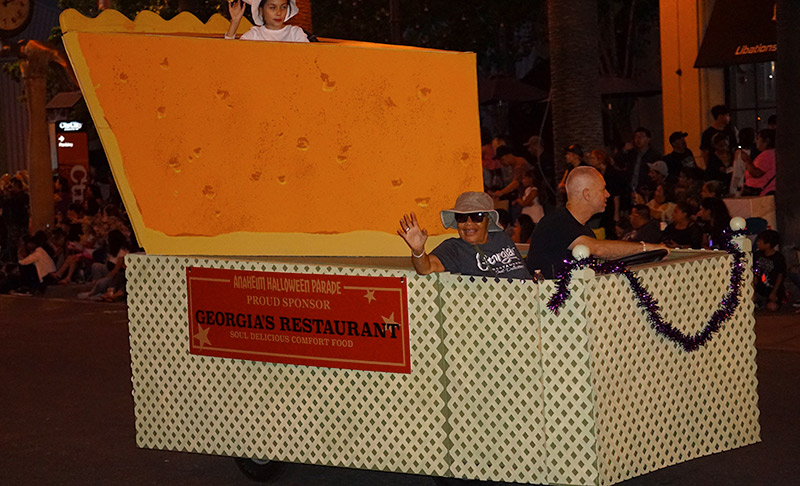 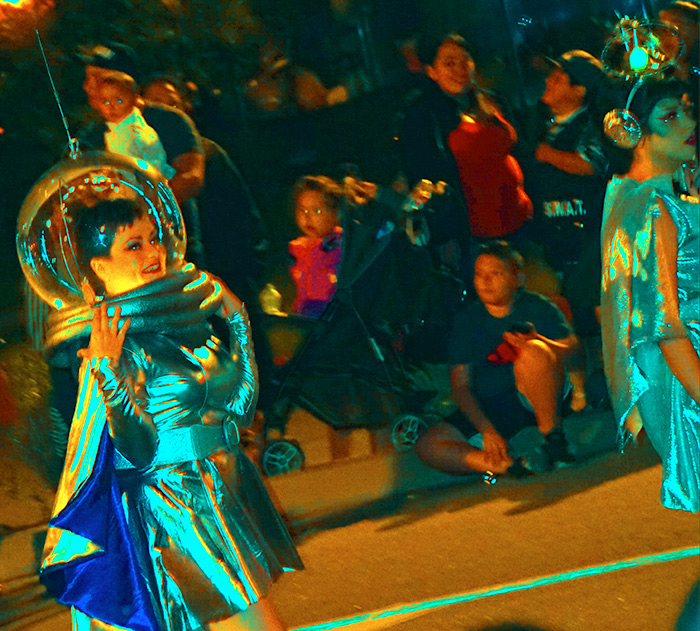 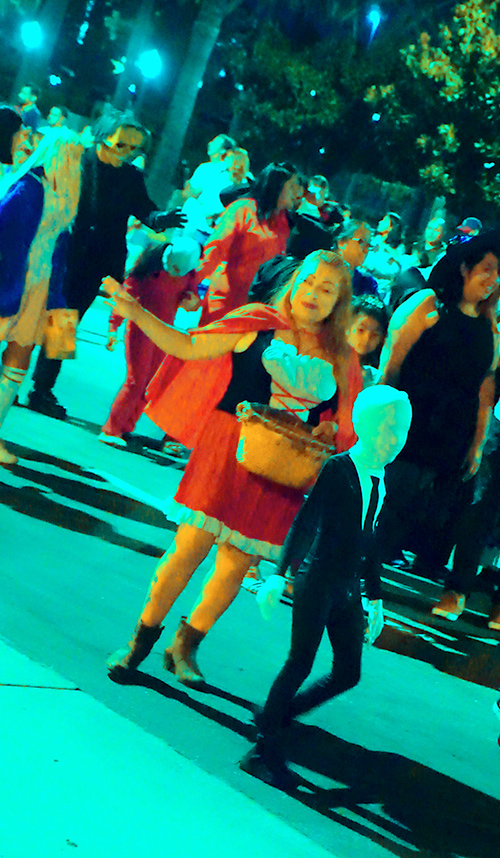 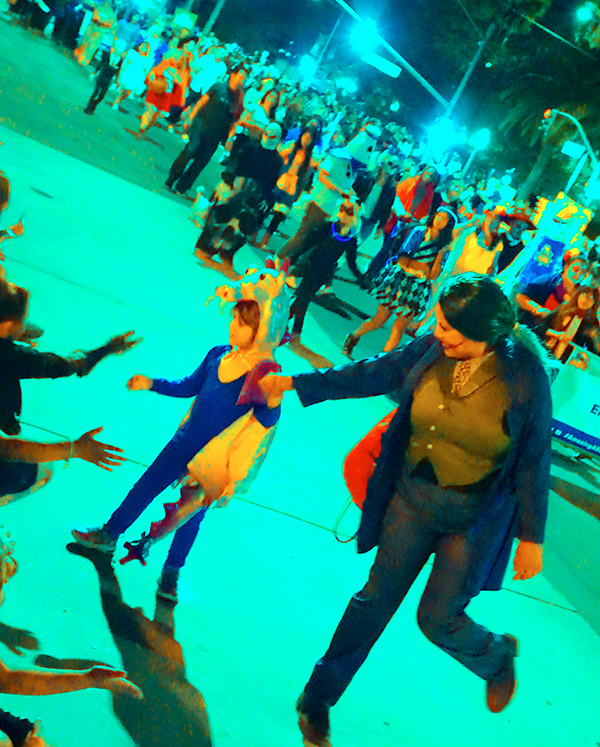 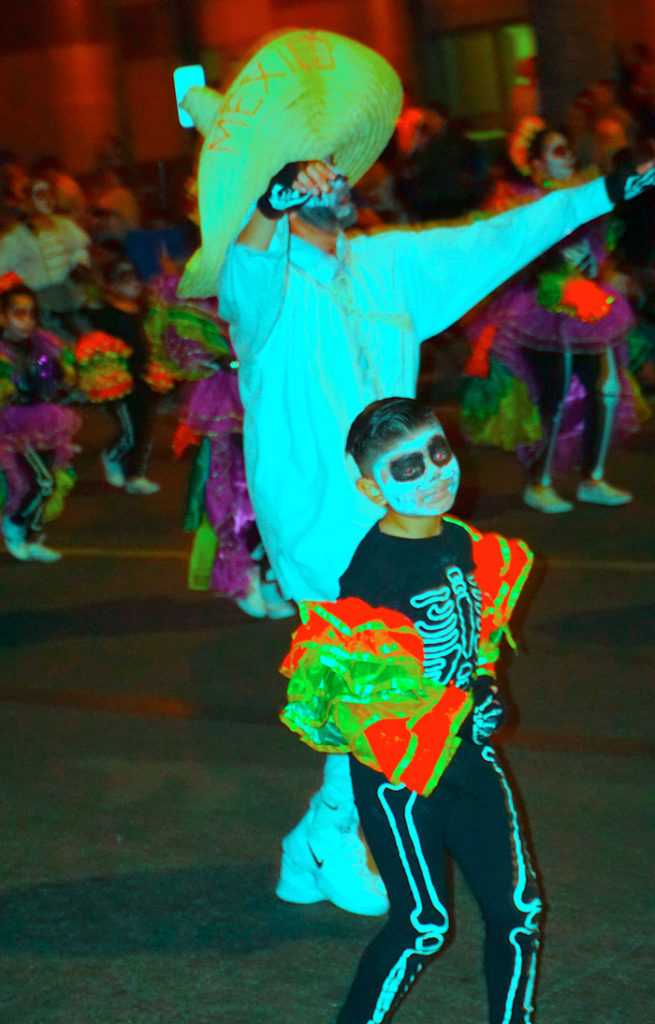 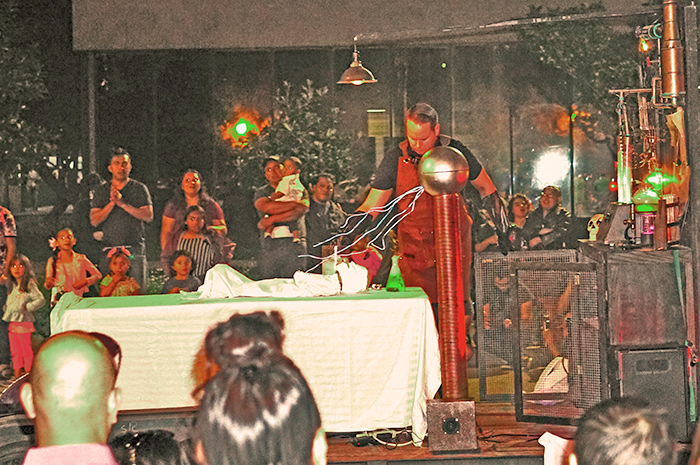 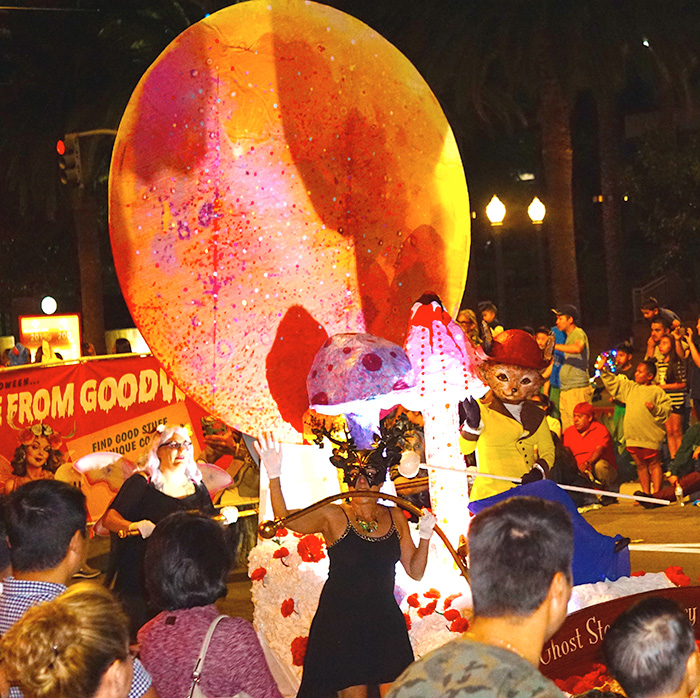 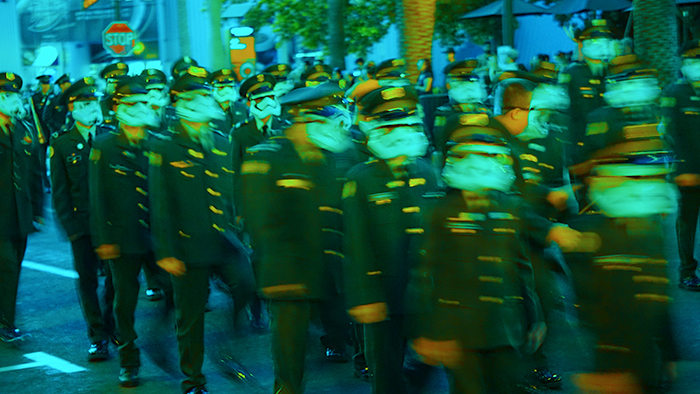 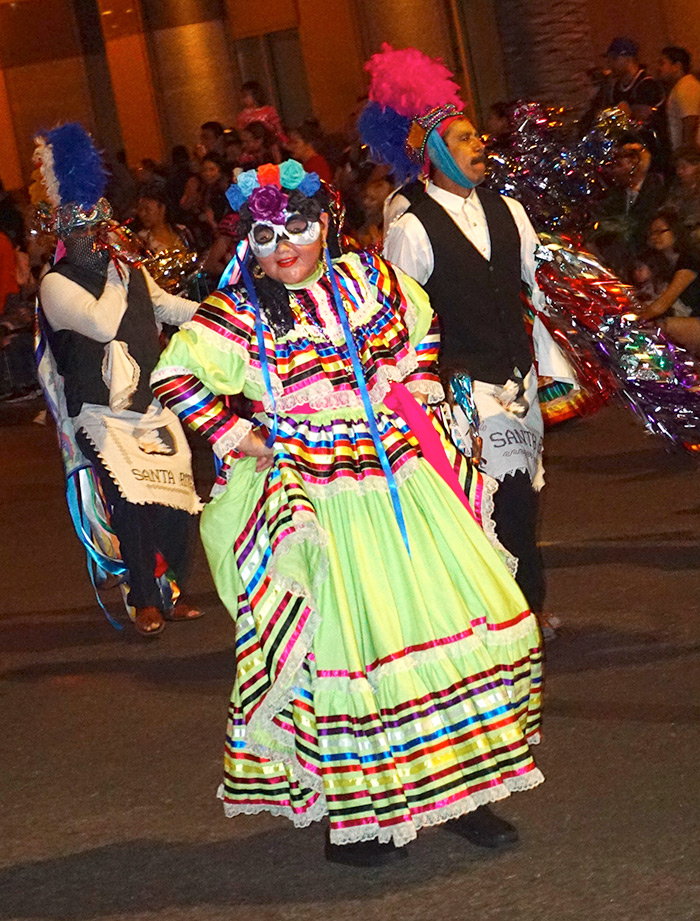 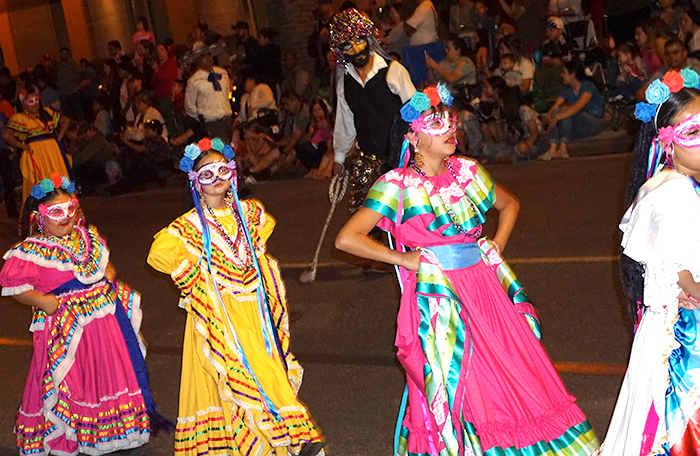 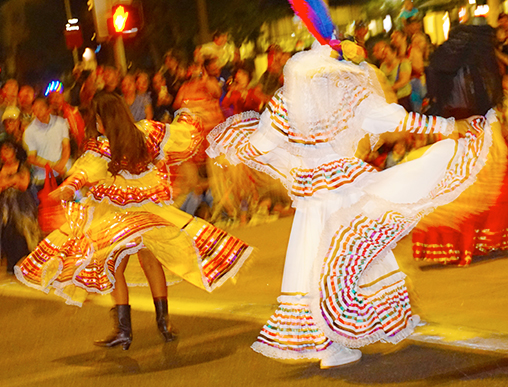 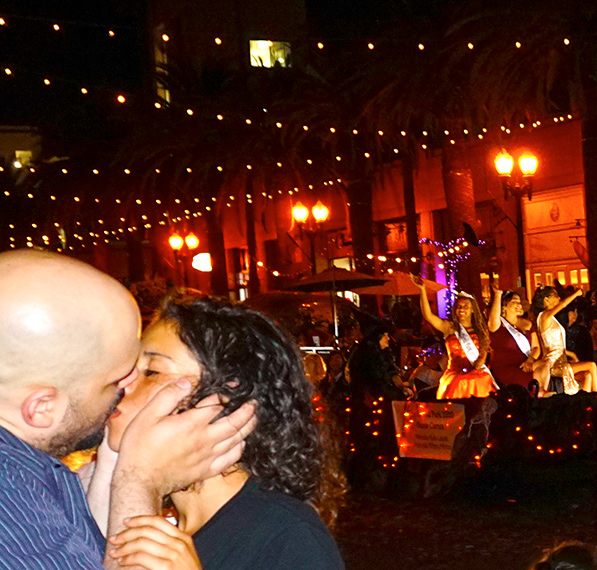 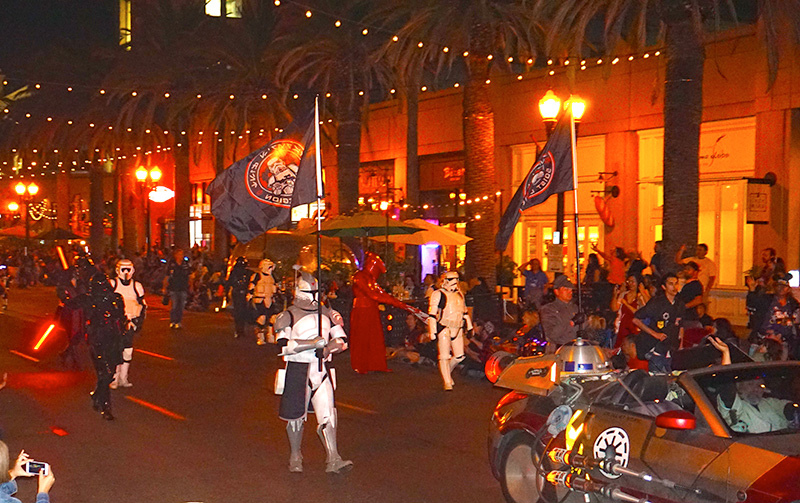 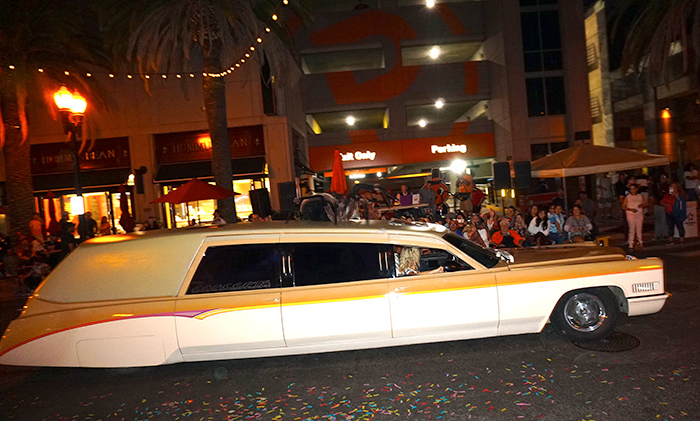 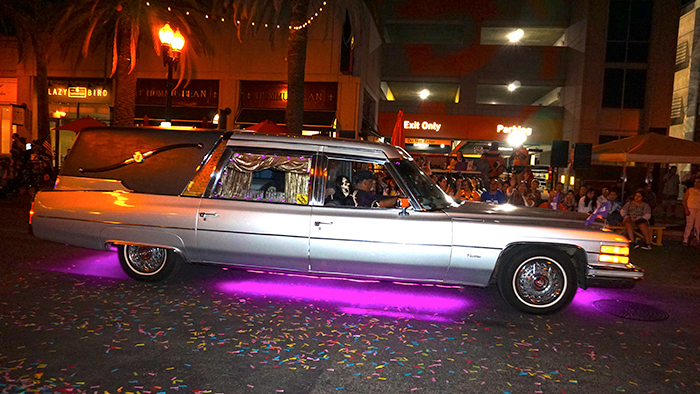