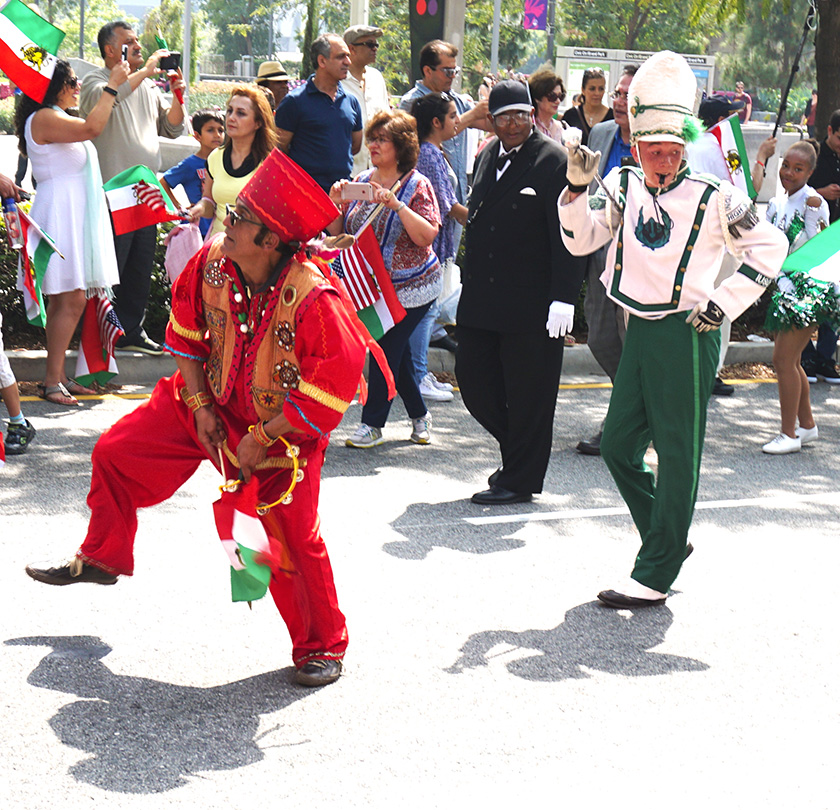 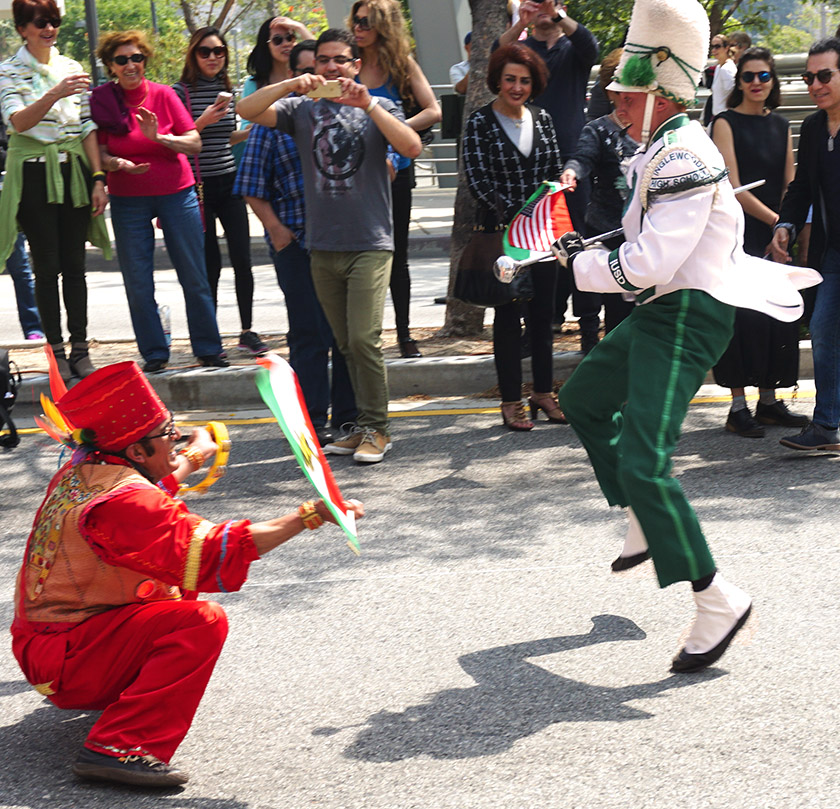 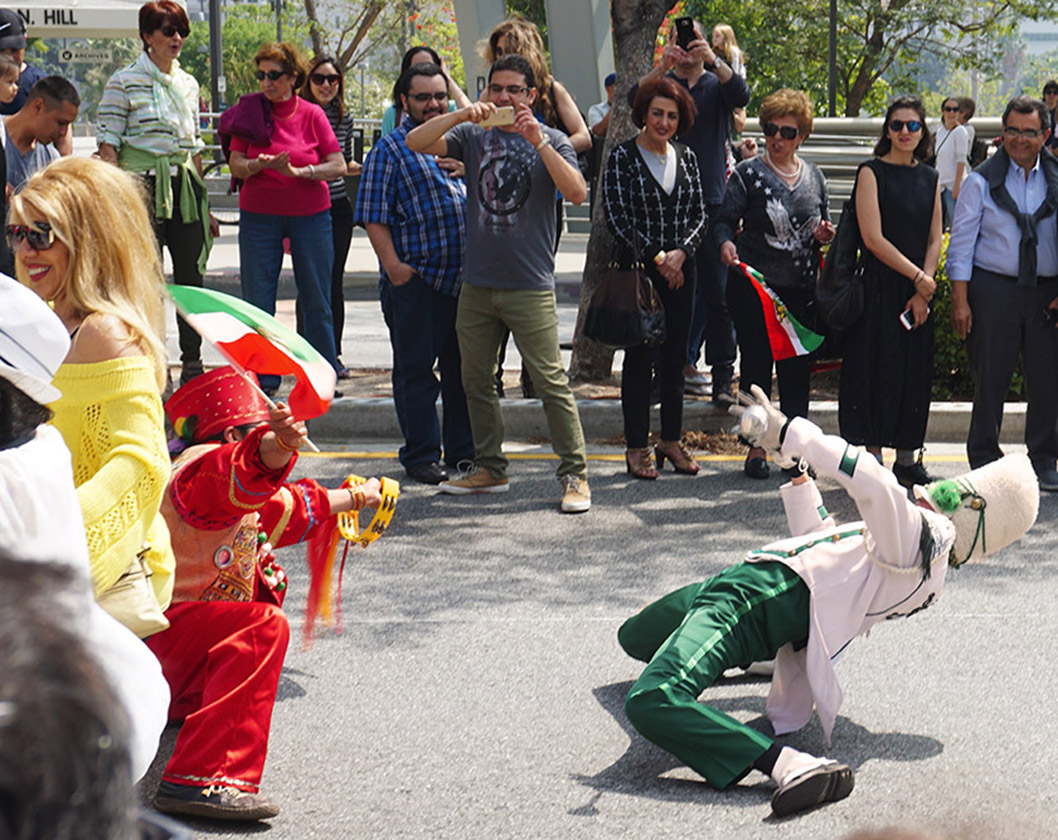 Since the mid 2000's, Persian/Iranian celebrations were organized on the University of California Los Angeles (UCLA) campus (2008-present), downtown Los Angeles Grand Park (2015-17), and in the Westwood Blvd./Wilshire Blvd. “Tehrangeles” area, along with other festivities scheduled in Southern California cities. Some of these Nowruz/Norooz events in LA have continued, while others reorganized or simply disappeared. In the photo essay below, I've included photos, descriptions, and symbolic meaning of one of the past parades, marketed as Norooz, held in downtown L.A. UCLA continues to have their annual event that employs the Nowruz spelling, so I will use this spelling.

The Persian/Iranian New Year celebration of Nowruz (a.k.a. Norooz, Norouz, Nowruz, Noruz, Nouruz, Nerwoz, Naurez), based on the Iranian Zoroastrian calendar, is a 13-day spring celebration in March during vernal equinox of Northern Hemisphere. Since 2010 The UN General Assembly designated the International Day of Norouz as March 21 to acknowledge the importance of this shared celebration. Iranians along with a number of other countries celebrate the holiday, including Afghanistan, Azerbaijan, India, Iran, Iraq, Kazakhstan, Kyrigystan, Pakistan, Tajikistan, Turkey, Turkmenistan, and Uzbekistan.(1,2) 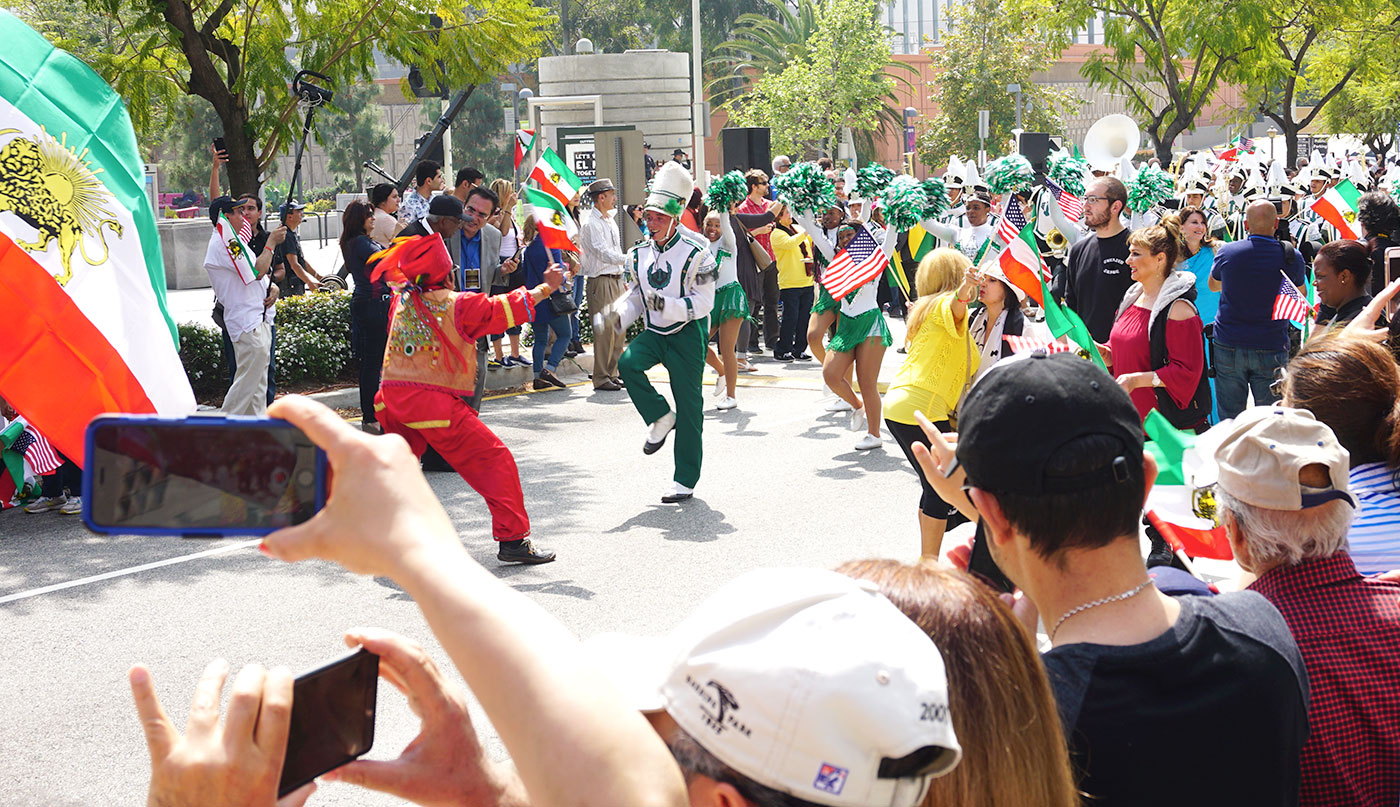 In the photo above is a character who interacts with audiences to welcome in the New Year. In these photos of Haji Firooz with the drum major of the band we see playful interactions ensue.

This messenger, Haji Firooz, of the New Year wears red clothing, hat, and plays tambourine, while in other Persian New Year celebrations the character is seen in black face or black mask. Although the black face is not present in the Los Angeles Nowruz parade I documented, it's a symbolic aspect that has a specific history. According to Mehrdad Bahar and other authors who have written on the holiday, it is said that the rite of the new year also involves the return of the dead expressed through the black masks "symbolizing dissolution of order, law and boundaries between existence and non-existence, life and death"(3,4). Additionally, it is suggested that the face makeup and play of the character is a "remainder of amusements and jokes in selection of a five-day-ruler called Mir Norouzi from the common people. This rite was held only in the feast of Norouz and not in any other major feast" (3,6). In an article about the New York Persian New Year parade, Amy Malek discusses how this character trait of a black painted face Haji Firooz is commonly contested in a U.S. context due to race relations and history of minstrel shows in the U.S.(5) 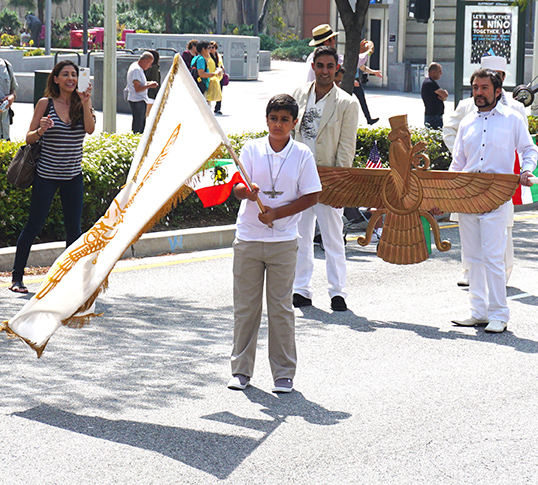 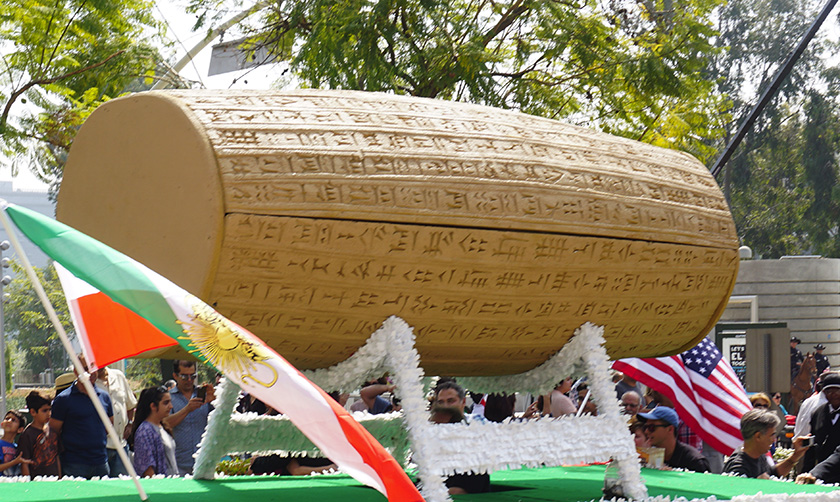 Faravahar, Flags and Cylinder of Cyrus

The photos display the Faravahar in a wood sculpture and on a flag  (left photo) and the cylinder of Cyrus (right photo). These symbolic associations to Persian ancient history and culture are common in Norooz parades.

The Faravahar symbol on the flag, sculpture, and necklace in the photo is composed of a winged man figure. It is a national symbol of Iran representing Persian identity, though it has its ancient religious association to Zoroastrianism.

Flag imagery in general can have symbolic associations representing history, politics, country, religion, and so forth. These parade flag choices can stand as a strong identity marker in the multicultural spaces of Los Angeles. The flags on display in this parade are: Faravahar symbol in gold on white flag; the shir-o-khorshid that depicts the lion, sun, and horizontal color bands of green, white, and red reflecting pre-revolution 1979 flag design; and the American stars and stripe flag.

The Cyrus cylinder float in the parade is a replicant of the fragmented clay cylinder. It shows the 45 lines in Akkadian cuneiform script, with some inscription broken away. Background history: The original was excavated from the Marduk temple site in Babylon 1879. Although there are various interpretations of what is said and meant in the text during that time; I only provide links to these interpretations versus selecting a particular interpretation to reference (7,8,9). 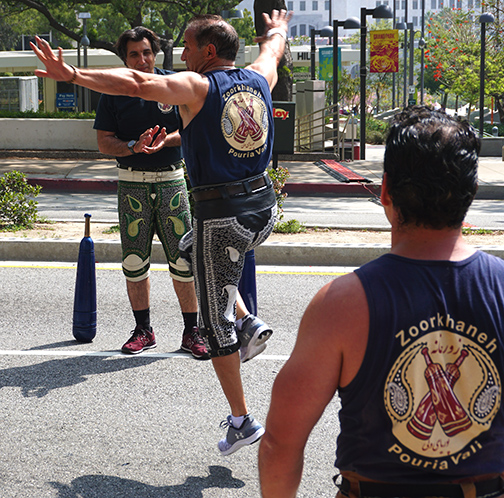 Pahlevani and Zoorkhaneh sport and ritual

In this photo we have Pahlevani and Zoorkhaneh sport and ritual on display with spinning (Charkh Zadan) and swinging of meels/mils/Indian clubs (wood weights with a handle weigh from 5 to 40 kg). This is ancient martial arts that is recognized as an UNESCO intangible heritage that combines body building rituals of weight training, calisthenics, martial arts, with music and literature.

In the LA parade, the Zoorhkhaneh Pouria Vali group (Van Nuys, CA) performs various movements with meels/mils guided by a myander (center athlete). Each athlete in the group wears shirts with emblem and the Bastani embroidered cloth/leather leg to knee trousers. Although these men in the parade photo carry only the meels/mils, in the actual exercise rituals there are other instruments used that include shield (sang), push up board, and chain and bow (kabade). (10,11,12,13,14,15)

An extensive history of this ritual and sport of the mind and body is included in a number of articles listed below. Ali-Mohamad Amirtash, further provides a detailed explanation of the philosophy, ritual, and sport that "fuse(s) elements of pre-Islamic Persian culture (Zoroastrianism, Mithraism, and Gnosticism) with the spirituality and code of ethics of Shia Islam and Sufism." (14)

Below are more photos that showcase Persian/Iranian culture and history on display during this Nowruz parade and festival held in Grand Park - Los Angeles - 2016. 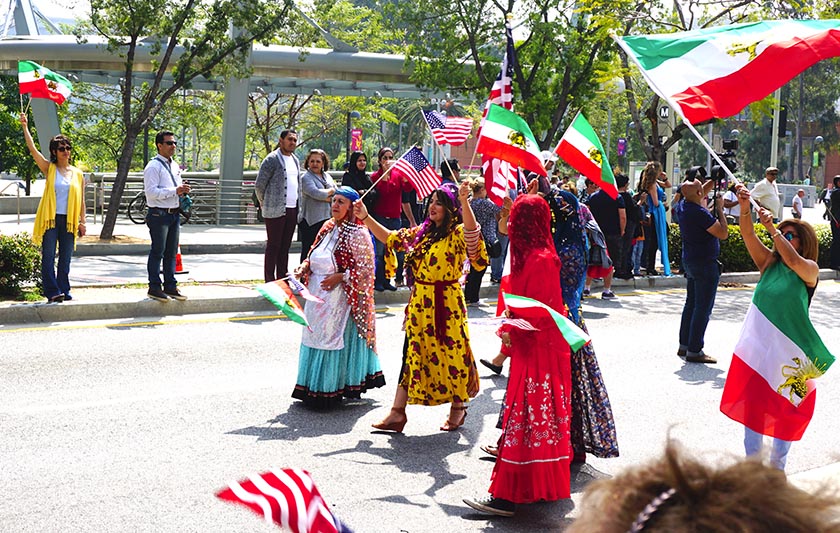 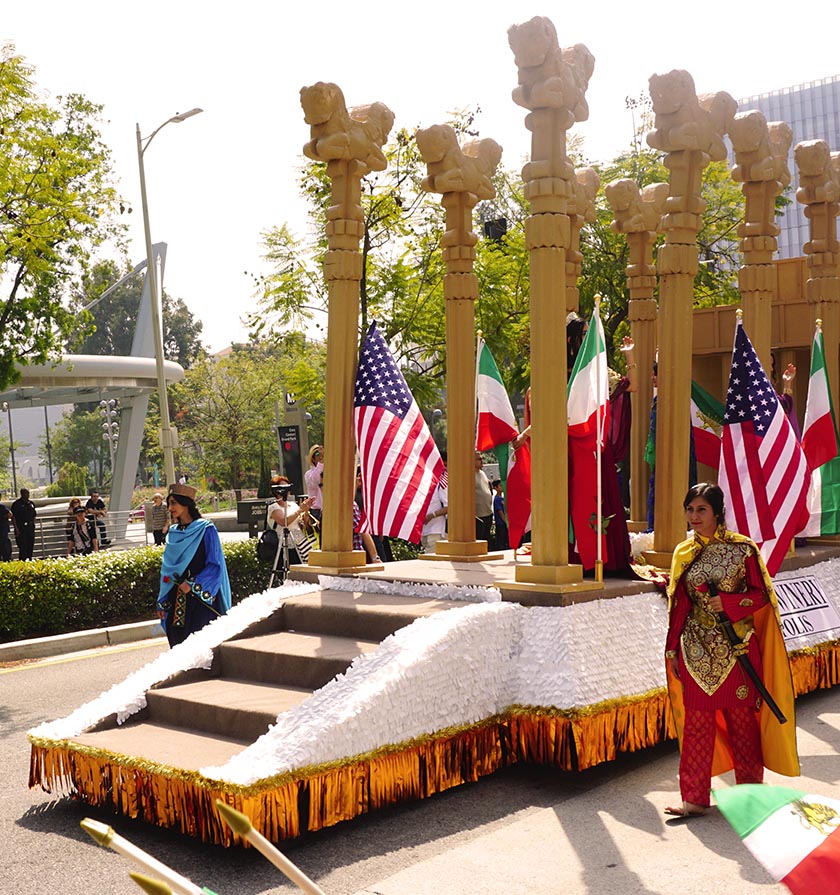 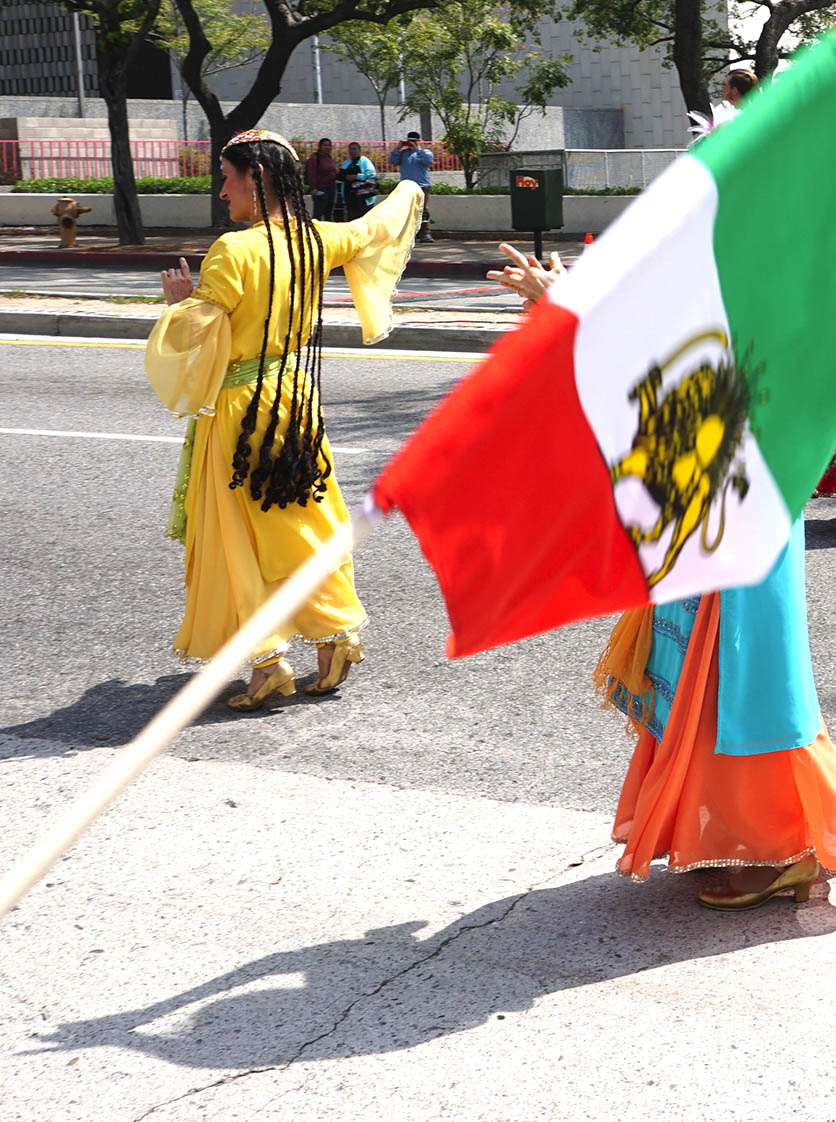 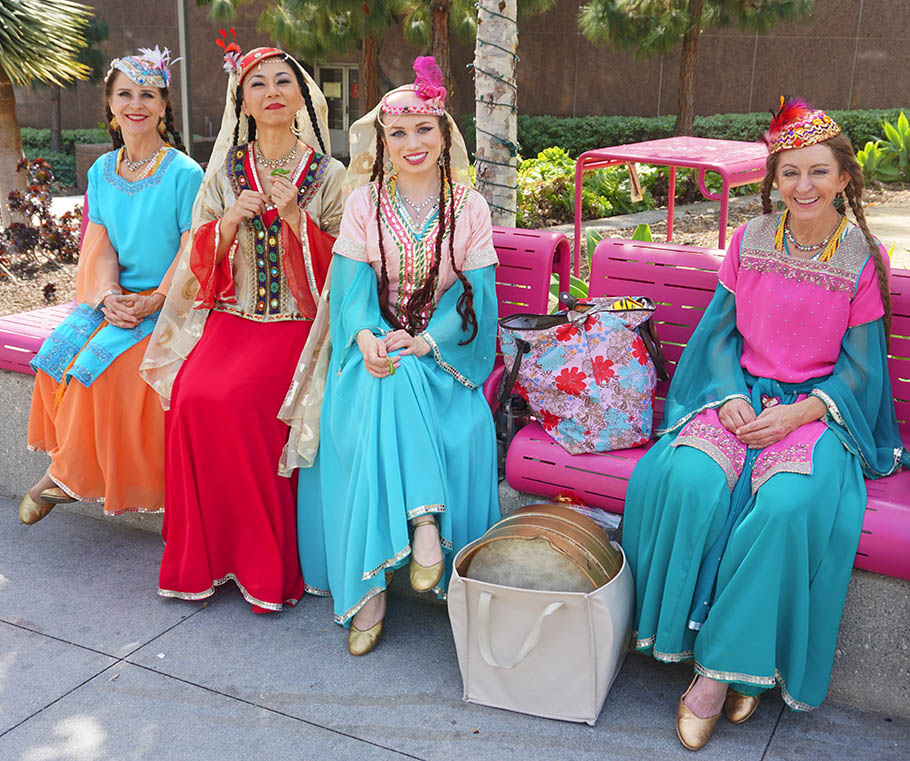 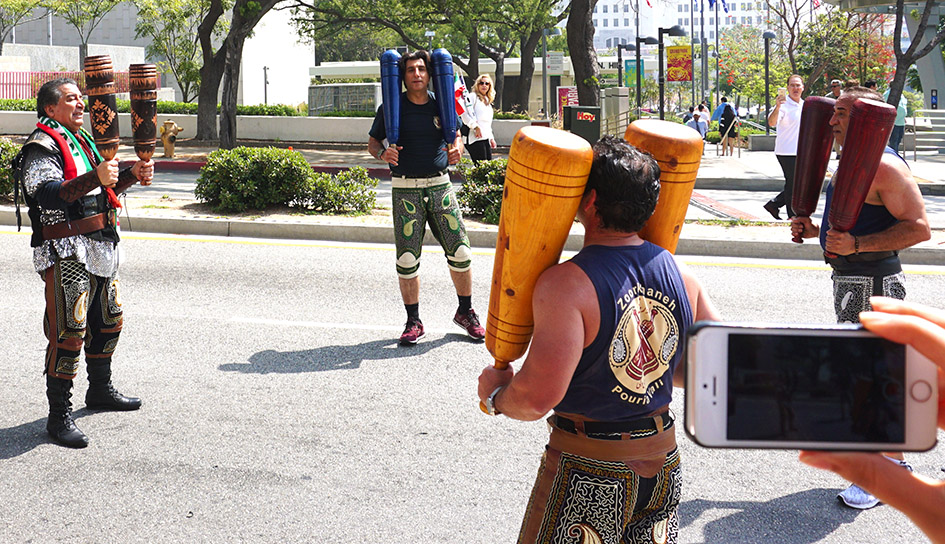 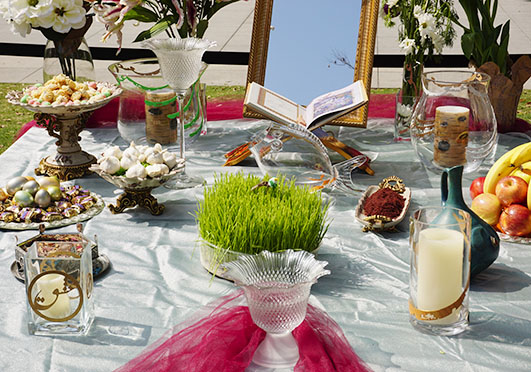 My interest in Persian culture reaches back to my dormitory neighbor/friend, Pantéha, of Persian decent, as well as, my experiences living in Los Angeles since early 2000’s. However, it was in 2006, co-teaching an American Folklore course at UCLA that I began researching Persian foodways, celebrations, and symbolism after buying the “LA menu munchies”  DVD at the Japanese American National Museum which included “Mona and Persian New Year” and multiple short, personal narrative videos of people in their homes preparing and discussing food and culture. In this particular Persian New Year segment, Mona shops at Elat Market, one of first LA Persian Markets, then prepares her holiday meal and “Haft Seen” table, while explaining some of symbolic elements. It was a personable and informative DVD that brought me into the living and cooking spaces of various Los Angeles area residents.