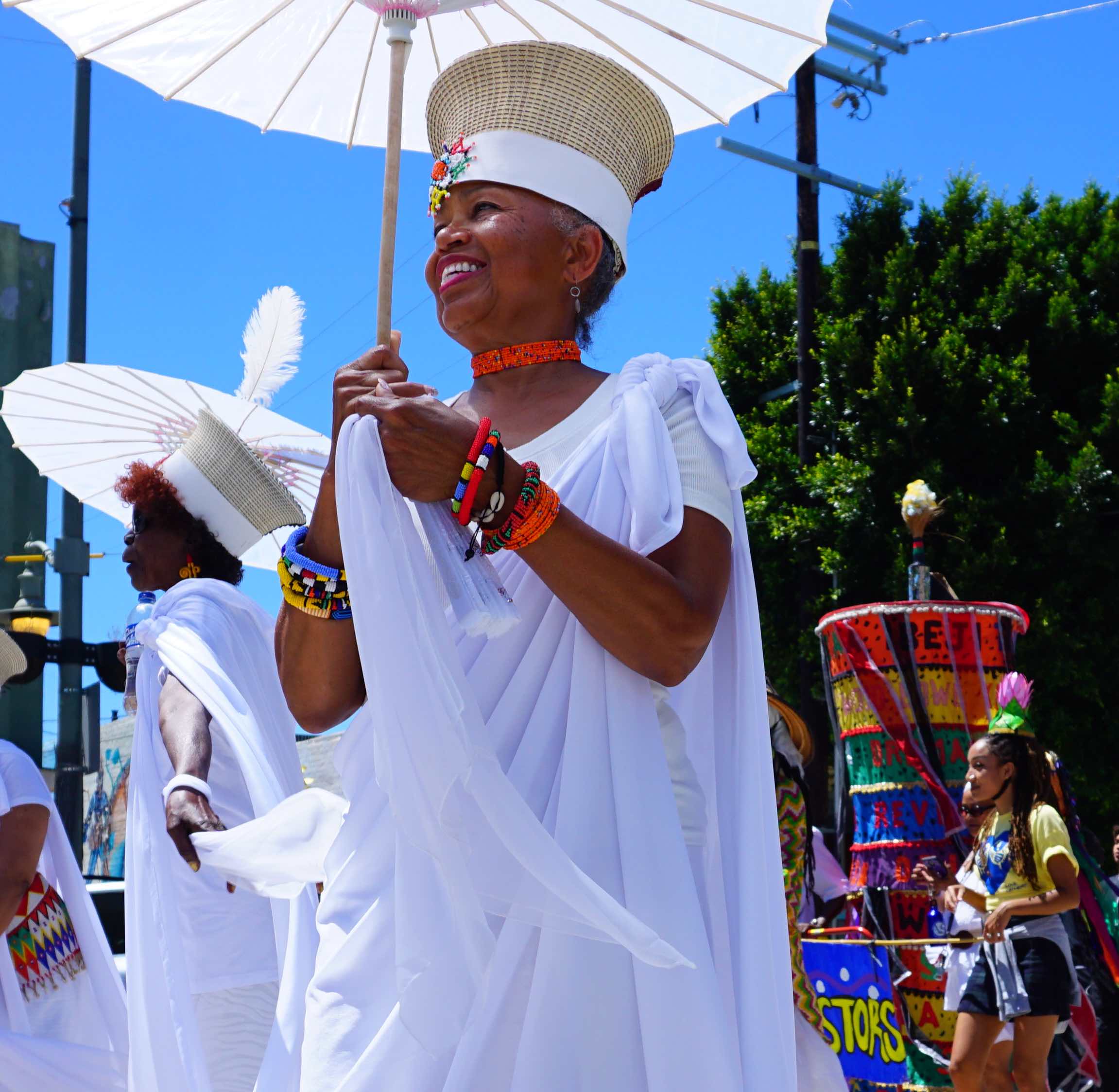 Being there while not being there, it’s an existential question. Or in my situation, it’s what I’m attempting by creating 360-degree videos of parades and processions and posting online. After working with virtual reality headsets, I had this plan to document and convert my videos into visual and aural immersive experiences — grand idea, not so easily implemented. I have amazing photos of the event participants, though I was curious to see if 360 video could add another dimension to the documented experience.

The 360 video, also known as immersive video or spherical visuals, gives the viewer a feeling of being there. For an ethnographer, anthropologist, or folklorist, being there, in the field, documenting the moment, enables one to acquire greater first-hand knowledge of an event. For a viewer wanting to watch a parade or procession as if there, the 360 video provides head to toe, back to front event coverage. For a person wanting to create appealing visual art, well, it would take more time-consuming editing and expensive camera equipment.

I can do this

Having watched a BBC 360 video of the Royal Procession of King Jeongjo and other immersive videos, I thought I could do it. I had experience filming on super 8, videotaping, editing, and even live video mixing and mapping for years. I had received a part-time faculty development grant to pursue immersive video formats. It seemed that in no time I could be watching these Los Angeles parades in an HTC Vive or Oculus headset.

As I documented multiple parades and processions with the Ricoh Theta V 360 video camera (4K video and ambisonic audio quality), I juggled my phone, still camera, interchangeable lenses, and the 360 video camera on a stick while squatting on the pavement of these events. The Bluetooth capabilities of my phone allowed me to operate the 360 camera on a stick. It was quite a balancing act.

What I learned about this 360 camera videotaping experience was: red sunspots, blurry edges, two lenses to smudge, shaky stick, video seams, and new editing issues due to the equirectangular shape. Even though I used the Ricoh software for download, edited with Final Cut Pro and Adobe Premiere, and later injected it with metadata for YouTube, I needed upgrades. I upgraded to Adobe Premiere Pro CC, which made immersive video editing more manageable, but with fewer options than when editing with 16x9 video. One good thing, I didn’t have to stitch the video seams together with this consumer camera, but somehow I did end up with a wicked stitch in the editing, and people became twins.

Now you see it

As you’ll see below, I’ve embedded a few of my 360-degree video clips from local parades and processions with all the video and editing flaws. I uploaded the 360 videos on YouTube then embedded them on my site. I could have used other free services, such as YouTube, Vimeo, Veer, Facebook, or some other service that also provide 360/VR player capabilities. Each of these players offer varying image quality and browser capabilities, as well as differences in how the computer vs. mobile device play it.

I'm actually hoping a person watching the video is aware or learning now that 360 video is a little different that typical flat embedded videos. How it displays can vary.

If you look at the videos on a computer, they show an equirectangular flat shape, but once played it's suppose to turn into a 360 viewing experience allowing one to move around the screen and see in all directions with the mouse pointer.

If you watch the videos on a mobile screen, then you'll have to click the play button, which will take you to YouTube site. Then it'll ask you to play in 360 video viewer or the YouTube ap. Checking the resolution in YouTube is important at this point to fully experience high quality 360-degree video. A normal 480p to 720p video resolution is poor quality imagery for this 4K footage, so select the 1440p or 2160p resolution; otherwise, it's pixelated and blurry. If you choose to watch the video in VR cardboard or VR headset, it might require other types of adjustments.

I hope my video experimentation with new technologies shows how parades and processions can be experienced and documented in new ways. I've focused on 360 video technology, though please visit the following sites to learn more about the LA area events documented: Day of the Ancestors: Festival of Masks procession, Nisei Week Grand Parade, Westchester 4th of July parade, and LA Pride Parade (West Hollywood). If Interested in more comparisons of 360 technology, I've including two links from 360 Rumors and ThreeSixtyCameras.

*If on a mobile device viewing the videos below, select for 360 viewing or see all videos on the YouTube channel HERE